Somebody mentioned in a comment yesterday that we all had neanderthal d.n.a. in our genes. But this is not true. Most native sub-Saharan Africans do not as their ancestors were the homo sapiens who remained at home when the small group of humans, who were the ancestors of everybody else in the world, left Africa and started to colonise the middle east and beyond.

We now know that these migrants definitely mated with the neanderthals they came across. In fact, there is so much neanderthal d.n.a. in their descendants and it is so universal throughout the world that the scientist who conclusively proved this fact stated that they must have been at it like rabbits (or words to that effect).

What I have not yet come across is any discussion of how much difference the neanderthal d.n.a. has created between the human lines that remained in Africa and the human lines in the rest of the world. Probably because it would not be considered politically correct to do so. But I think this discovery does beg interesting questions about what constitutes a species and it also adds another dimension to the theory of evolution insomuch that cross fertilisation between species may be far more important than we have thought up to date. 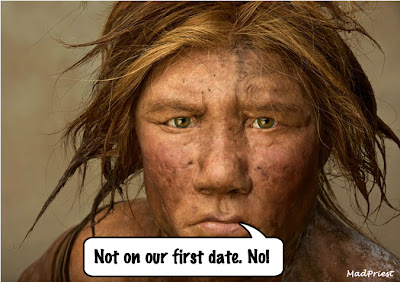