In Arizona, in 2009 they passed a bill that redefined "dependents" of state employees as "spouses", with the intent that same-sex partners of state employees would no longer be eligible for health benefits. Several plaintiffs took the state to court (federal court). When the district court found for the plaintiffs, Arizona appealed, and the case went to the 9th circuit, who have now released a ruling that keeps the law from going into effect, at least for now.

Seven Danes, including a family with three children, have been released after being held hostage in Somalia since February, when their yacht was hijacked by pirates in the Arabian Sea.

Footage of labratory-raised chimpanzees seeing sunlight for the first time has emerged, showing the primates squealing with delight and hugging each other. After spending decades undergoing medical tests, including being injected with HIV and hepatitis, their amazement at finally being free is clear. The group gained their freedom after a 14-year battle to secure their release from captivity.

I ask your prayers for Jim O., a friend from grad school days, who has inoperable colon cancer.

Elizabeth asks for our prayers in respect of "two major problems" in her life.

A teenager has been stabbed in the same north London street where a man died after confronting a group about throwing conkers at him. The 15-year-old was attacked in College Close, Edmonton as officers were in the road seeking witnesses to the fatal stabbing of Stephen Grisales last week. The latest victim is in a serious but not life-threatening condition.

From THE BOTSWANA GAZETTE:

Swazi police Wednesday fired teargas and rubber bullets to break up swelling protests against King Mswati III, activists said, while two South African union leaders were deported for trying to address the crowds. The clashes erupted on the third consecutive day of protests against Mswati, Africa's last absolute monarch, who is accused of bankrupting the impoverished nation's treasury while enjoying a lavish life with his 13 wives. 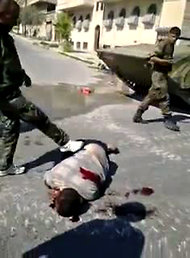 Syrian security forces mounted violent raids on neighborhoods in Homs, the restive central Syrian city, on Wednesday, hunting for a group of soldiers who defected to the opposition early in the day, activists said. They estimated that more than 20 people had been killed in those raids and other clashes.

Candles flickered beside mounds of red carnations at the stadium of one of Russia's top ice hockey teams on Thursday after almost the entire team was wiped out in a plane crash that killed 43 people. Fans and players across the world paid tribute to the Lokomotiv Yaroslavl team, the day after the Soviet-designed Yak-42 passenger plane slammed into a river bank just outside Yaroslavl, 250 km (150 miles) north of Moscow. 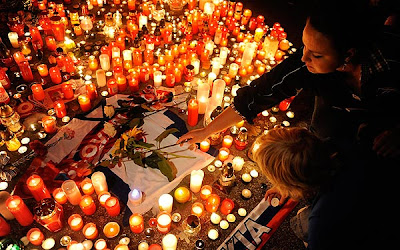