NewSpring Church Pastor Perry Noble recently delivered a hard-hitting message on the seriousness of sexual immorality in the church. For those who take sexual sins lightly, he made it clear to them: "You're not saved." Noble tackled adultery, friends with benefits, pornography and homosexuality as the four common sins that Christians have come to tolerate.

Church attendees were given the chance at the end of the service to seek help for any sexual sin they were struggling with.

COMMENT: So sheepshagging has dropped out of the top four, then.

And forgive my English ignorance but what the feck is "friends with benefits?" I've got friends who are on welfare. Heck, I received benefits myself until last January. Not only did I not regard it as a sin but, I promise you, I got no sexual gratification from signing on whatsoever. 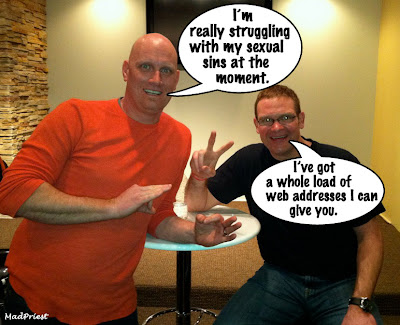