There are rumours on the internet grapevine that our much missed, absent friend, Dah·veed, is undergoing "some sort of cardiac procedure" today. I cannot verify this but I am sure as heaven going to pray for him anyway.

I’d already been stunned by the spectacle of high water and amazed at the wreckage of mud-encrusted Shelburne Falls, but with the water levels dropping, a whole new level of devastation was being revealed.

At the hamlet of Lyonsville, the first bridge was closed – the roadway, gone. Beyond the bridge was more destruction. Dams: gone. Powerlines: not gone, but nonetheless destroyed. These high tension lines can’t be shut down until a reach-around is arranged. The road northward through Halifax, VT was, shall we say, “compromised.” Jacksonville, VT took a monstrous hit; they opened the Glory Hole at Whitingham Reservoir to avert a dam breach, but totaled a lot of the places downstream, including the Honore (formerly North River) Winery.

Wilmington was unreachable by land by any means. Bennington, the next large city going west, was similarly unreachable. National Guard helicopters were doing the essential lifting there. 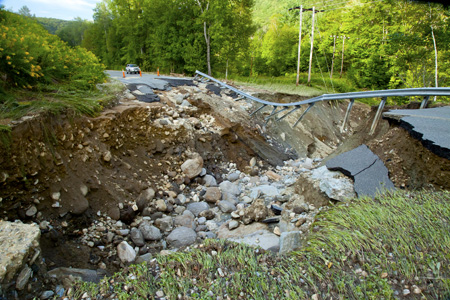 I know the Cold River along this beautiful stretch of Route 2 well, every swimming hole and sunning rock. But not today. Today, it was gone. Gone! All of it, the swimming holes, the forested shorelines, the valley I love so much I can taste it, gone. Route 2, the lifeline of our county, miles of it, gone. Car sized boulders and a forest’s worth of trees buried the pavement, filled the gaping holes, obliterated the way forward. And the river was unrecognizable, its massive concrete retaining walls collapsed, its course altered for all time, its beautiful pools obliterated.

I don’t mind saying that I cried.

It is Littlebangtheory's job to "fix this sort of thing." He is very pessimistic about receiving the funding to be able to do it.

The crane will be here Friday morning, to begin removal of the tree and attempt to set the broken chimney top section back onto the bottom. Eventually, he will have to remove the old, broken flue tiles and put in new ones and then re-grout the entire fireplace. (Oh, joy.) Hopefully, they will not do any further damage during this process.

They will replace the gutters on the rear of the house and replace 24' of deck railings and 4x4's. Until the tree is removed, we can't see whether or not the new deck table and chairs were injured. I haven't even finished paying for them yet!

Wish us luck and keep us in your prayers... please.

Thanks to all in the OCICBW... community for their prayers during Hurricane Irene. Power here restored after four days out. Had all trees pruned last week right before Irene mad her path north so no tree damage and no house damage ... thanks be to God. A very scary weekend but all is fine. Lost entire contents of refrig and freezer but otherwise no problem.

Brian R, at NOBLE WOLF, asks for prayers for his friend, Birdie.

Birdie lives in Indianapolis and, after hearing of the stand collapse at a Fair in that city, I contacted her and her reply was that while she was not at the fair she was waiting to learn about a lump on her breast. The following week the news first got worse as she learned it was cancer and it was invasive but then thankfully some good news that it had not spread.  However Birdie begins the first of several chemotherapy treatments this week and faces a mastectomy around Christmas time.

Please pray for her, her family and close by friends as they support her, and the medical staff as they make all the decisions they make about her treatment. 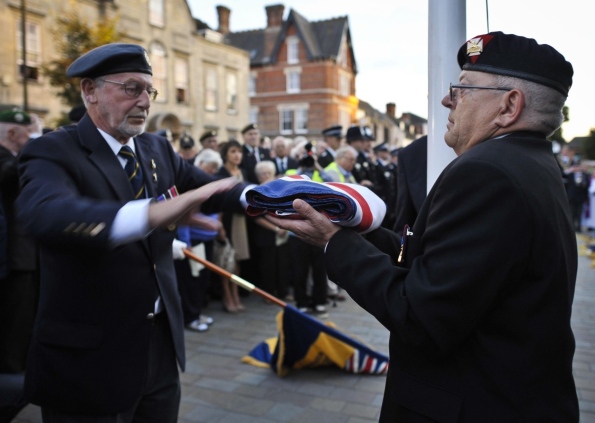 A moving sunset ceremony yesterday marked the end of military repatriations through Wootton Bassett as the Union flag on the town’s high street was lowered for the last time. Hundreds of people attended the ceremony carried out in the same simple, dignified nature of the military repatriations held over the past four years in which townsfolk stood shoulder to shoulder with the grieving families of servicemen and women killed in action.

It signalled the end of an era for the small Wiltshire market town, which has seen the coffins of 345 service personnel pass through the town from RAF Lyneham en-route to Oxford’s John Radcliffe Hospital. What began as an impromptu act of respect from local people grew larger than anyone could have imagined, drawing international recognition.

The bodies of the dead will, from now on, be flown into Brize Norton airfield.

Murders this week in the New Orleans area, nine deaths in three days!:

At least 88 people, including 10 children, have died in detention in Syria since the uprising against the regime began in March in what amounts to "systematic persecution on a vast scale", according to Amnesty International. The majority of victims were tortured or ill-treated, with injuries ranging from beatings, burns and blunt-force traumas to whipping marks, electrocution, slashes and mutilated genitals.