We're All OK and we hope you are too. Some minor damage to the basement and the shed and some tree limbs down in the yard. We are very lucky.

I just got home and must make sense out of my space. We moved so much of the basement up onto the first floor and it's an obstacle course. My entire body is screaming from strained muscles. You haven't lived until you carry two fat cats in carriers through torrential rain.

DitmasDeb reports that all is well, pretty much, in PROSPECT PARK. In fact the closure of the park for two days meant that there were no crack bags littering up the place when she visited yesterday.

Lake is a bit flooded, no more than during the big rain a couple of weeks ago. The birds all seem fine. Lots and lots of dogs out. 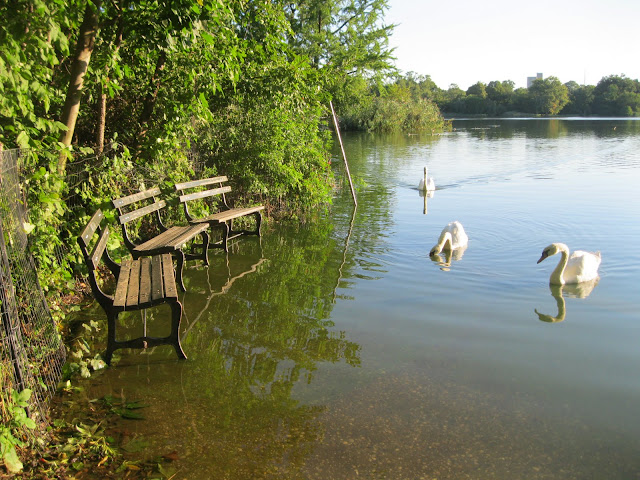 This is the worst of it. A fallen gutter next to the air conditioning unit we had installed two years ago.

Posted by It's Margaret at
LEAVE IT LAY WHERE JESUS FLANG IT:

We took a drive yesterday afternoon --while the realtor was holding the open house (let's see --an earthquake, a hurricane and an open house all in a matter of a week... sheesh!), and we couldn't get there from here.... There were trees down everywhere --huge trees --two on our block alone. 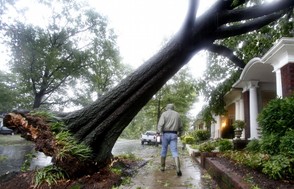 Well, like all rumors, the news that Shelburne Falls was destroyed was, thankfully, somewhat of an overstatement. The truth is that there was a hell of a lot of damage done, but much of the village was spared. The sad part is that what was most affected may be irreparably damaged.The Lamson Cuttlery Factory has by all accounts been rendered junk and may well be demolished. While at first glance the Bridge of Flowers seemed relatively unscathed a peek around the upriver side yeilded a heart-wrenching sight of structural devastation due to the battering inflicted by passing objects such as great whole oaks, cars, trucks, buses, the seventy or so van-sized propane tanks ripped from their moorings at the Rice Oil and Propane depot in Charlemont and various deck and barn pieces. There’s talk that the structure may be a total loss, though at this point it’s just talk. We’ll have to wait and pray and see what happens. 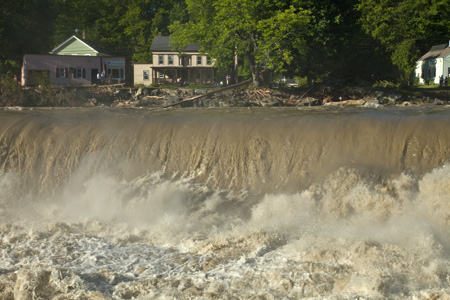 THANKS.... to each one of you who left supportive and sympathetic messages over the last few days. I really appreciate them. We have yet to see the insurance adjuster, but he promises that someone will be here as soon as possible. There are hundreds (maybe thousands) of people in NC who have worse problems than we do, and I understand they have to come first - but it is so frustrating to have to wait.

Tobias Haller's "Quote Of The Day":

There was a wonderful series of interviews with church leaders a few years back after a swath of hurricanes went through Honduras. All were asked 'Why these terrible storms?'

The local evangelical church leader said, 'God is punishing the people for their waywardness.'

The Italian incumbent noted, 'God is testing His people.'

Posted by Liz at FROM HERE TO ISTANBUL:

A couple of weeks ago, Cristy and I were driving someplace and she was reflecting on where we were about a year ago and how she was feeling then. "One of the biggest differences," she said, "is that I'm not waiting to die anymore. I'm learning how to live." The significance of the stem cell transplant had finally begun to sink in. It was more than a phenomenal medical procedure; her life has truly changed. It's hard to describe what it felt like for something to go from comprehension with the mind to being fully engaged by the soul. I don't know if that makes a lot of sense but it's an understanding of life and a future that becomes part of one's essence, the way illness, pain, and death were once a significant part of who Cristy was. Coming to that actual realization was one of those OH MY GOD moments. 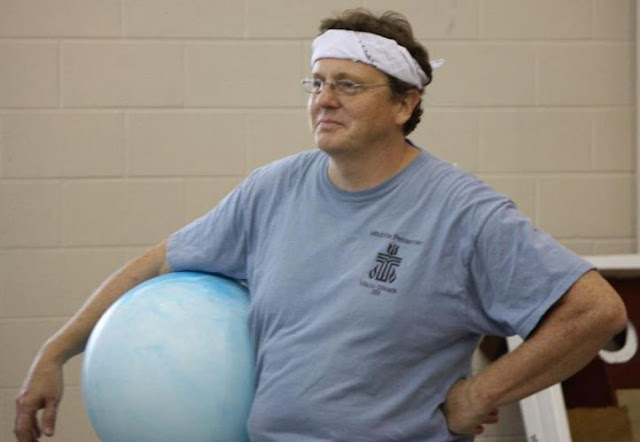 The legendary Presbyterian, heretic blogger, John Shuck, is 50 years old today. How he's got this far without somebody strangling him is a complete mystery. But I'm glad no one has because the world would be a much less interesting place without him.

It was ten years ago today (29th. August) that our Mum passed from this life. She gave birth to ten children, one of whom, our sister Sylvia, died soon after birth. The nine of us who grew up remember our Mum as a classy woman. We respect and admire the amazing way in which she raised nine children - it was an exhausting business. We are so grateful for her life, love and example. We do not grieve for she was ready to die. But of course we still miss her and think of her often.

Posted by Penelopepiscopal at
ONE CANNOT HAVE TOO LARGE A PARTY:

Today my son and his girlfriend headed out to Iowa for their junior year of college at a school new to both of them. My son has had his ups and downs about college, more downs than ups, but it has been clear to all of us that it is now time for him to leave the nest for real (as they say). Sad that I won't be seeing him much for a while (maybe a long, long while).

Syrian forces killed seven people on the first day of Eid al-Fitr in Syria, including four in the town of Al-Harra and two in Inkhil, in the Daraa province, and one in the (central) city of Homs.

The Israeli army is training Jewish settlers in the West Bank to repel any violent protests in the territories when the Palestinians try to secure UN membership next month.

Residents fear 35 people may have been killed in Bulambuli district, Uganda, after torrential rains triggered landslides. But only 24 bodies have been recovered so far. The village of Namwidisi has reportedly been completely submerged in mud. 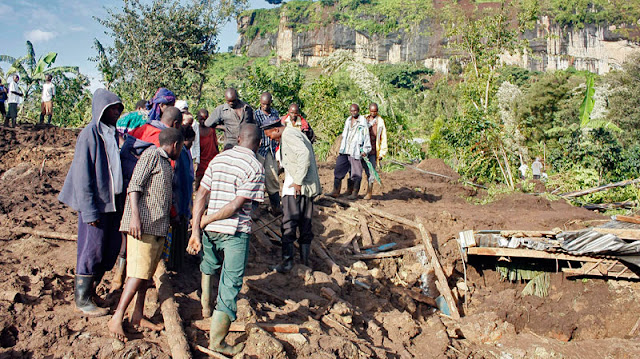 The Turkish military said Monday that it had killed more than 150 Kurdish separatists this month with artillery fire and airstrikes in northern Iraq that were carried out in retaliation for increased cross-border violence. The rebels, who are fighting for autonomy in southeast Turkey, often operate out of bases in northern Iraq, where the Iraqi Kurds have achieved a level of autonomy of their own.