The Prayer List is a daily feature at OCICBW… with an option to light a candle as you pray. If anybody has any concerns they would like included on tomorrow’s list please email me with details or leave your request in the comments to this post. I will include relevant photos if provided.

Major thank goodnesses that all our friends seem to have survived Hurricane Irene intact. Even Elizabeth Kaeton’s cottage on the coast appears to have weathered the storm. The only damage that has been reported so far in the Neighbourhood was at Kenju’s home where a 60 foot oak tree fell over and crashed into the chimney (details and more photos at IMAGINE). 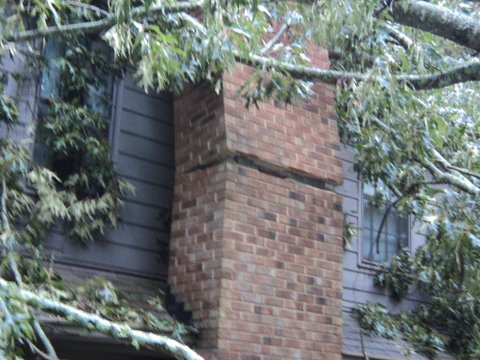 On the thirtieth of July there was a service of thanksgiving for the life of our friend, Kirstin. Andee has now posted about the service at BAREFOOT AND LAUGHING and also uploaded videos of the event. 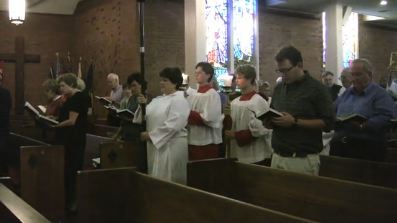 All our friends who are attending Greenbelt this year seem to be having a fine time. There’s been lots of meet ups and networking going on. Anybody interested in the festival should check out the live blogging at LESLEY’S BLOG. Here’s a photograph of the gigantic, RevSimmy towering above the world’s nicest atheist, Gurdur (a.k.a. Tim Skellett). 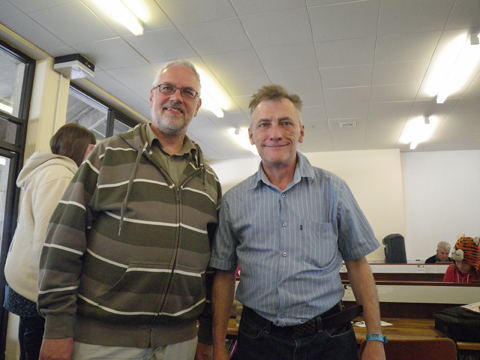 I went to see Dr. Crano (Diabetes) this morning and while my numbers (A-1c) are up a little it is not alarmingly so. He did not seem overly concerned or alarmed. The good news is that since the first part of June when I decided that enough was enough I have lost 20 pounds. Oh and for some reason this past week I have really been feeling good and my leg is not swollen today. 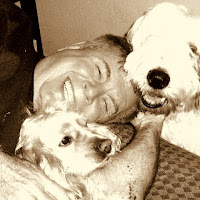 It was our great buddy, Leonardo’s birthday last Friday (Leonardo is the one in the middle in the photograph). He claims to be 68 years old so obviously has a portrait in the attic that is ageing instead of him. Happy Birthday, old friend!

Jendi has had two of her poems selected as the “Editor’s Pick” in the summer issue of “Solstice Literary Magazine.” You can check one of them out on her blog, REITER’S BLOCK. But, I warn you, she’s a bit clever. There’s none of your “The cat sat on the mat” – this is the real thing.

I’m not 100% certain but it may well be Viv and the bloke she shacks up with’s wedding anniversary today. Viv has certainly gone all lovey dovey over on her blog, ZEN AND THE ART OF TIGHTROPE WALKING. If it is, congrats you two! 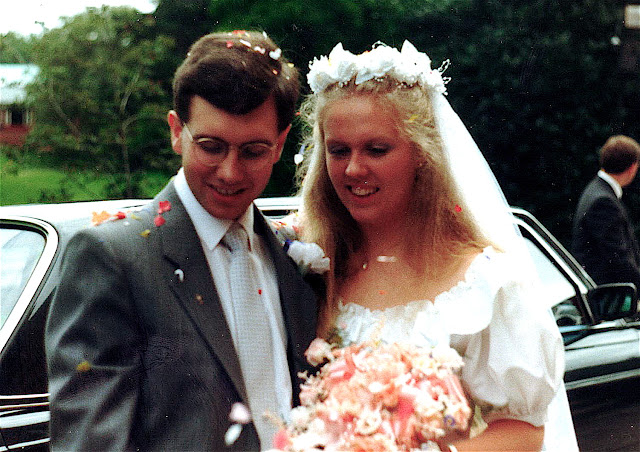 Please pray for David who had multiple bypass surgery yesterday. He is recovering but will be in hospital and cardiac rehab for a while. He is our organist and choir master whom we will miss for many reasons as he recovers.

Posted by It’s Margaret at
LEAVE IT LAY WHERE JESUS FLANG IT:

Please keep A in your prayers. A lives in a small 2-room apartment, and his joy is to grow tomatoes in the community garden. He came by our yard sale and said he has decided not to return to the parish I served –he said to me, If they can do that to you, they can do it to me, and I won’t go any place that would treat someone that way…. And J too, who is terribly distressed. And not attending. That saddens me so very much…. please keep them and the worshiping community at St.Served in your prayers.

From The Daily Comet:

A 33-year-old man is guilty of bludgeoning a priest to death in August 1992, a verdict that brings closure to a murder mystery that stumped police for 15 years.

Prosecutors argued that Odomes bludgeoned the Rev. Hunter Horgan to death Aug. 13, 1992, inside the priest’s office in St. John’s Episcopal Church in Thibodaux. Odomes, who was 14 years old in 1992, was arrested in September 2007.

Pray for Fr Hunter Horgan’s family and all who loved him, including the parishioners at St John’s, that God will give them comfort, consolation, and the peace that passes understanding to keep their minds and hearts. Pray for Derrick Odomes.

Please pray for Jan at YEARNING FOR GOD, who has decisions to make regarding the treatment of the rheumatoid arthritis she is suffering from. As is so often the case in the USA the decision may be taken out of her hands by her insurance company.

Radical Muslim sect, Boko Haram, which aims to enforce a strict version of Sharia law, has claimed responsibility after a car loaded with explosives rammed into the United Nations’ building in Abuja, Nigeria, on Friday, killing about 20. The number of injuries was unclear but they were “many.” 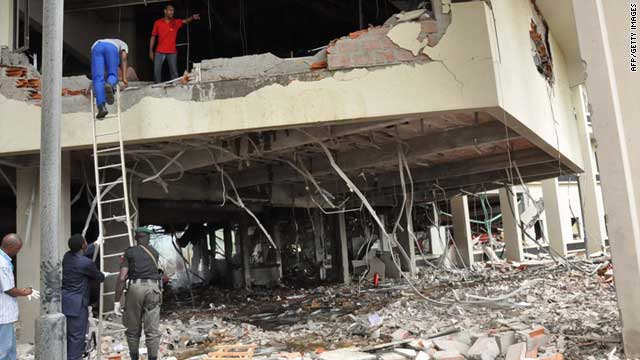 Victims of a suicide bomb attack at Baghdad’s biggest Sunni mosque have been buried. The attacker, posing as a beggar, detonated the explosives in the middle of the building just as evening prayers finished. At least 29 people are reported dead – among them a member of the Iraqi parliament. It is the most serious incident in Iraq for two weeks, when a series of suicide bombings killed at least 70 people across the country.

The US East Coast has begun clearing up after the devastation of tropical storm Irene, which killed at least 21 people. The storm is now lashing Canada’s north-east, after causing severe flooding in the US and leaving some five million homes without power. 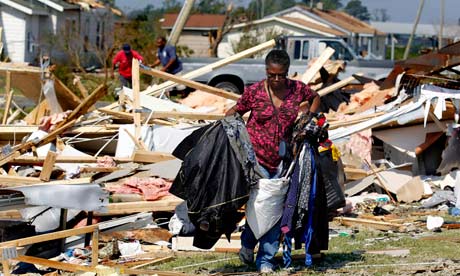 Syrian rights activists say government security forces have surrounded a central town that has been the site of protests against President Bashar al-Assad. Troops surrounding the town of Rastan fired machine guns Monday, continuing a crackdown against a 5-month-old pro-democracy uprising. The United Nations has said more than 2,200 people have been killed since March.