A Houston judge entered an order on June 24 which prohibits a father from leaving his children alone with any man they aren’t related to “by blood or adoption.” Because there was no allegation of abuse in the case, family law practitioners say the order is an unheard of infringement on the rights of parents and a judicial condemnation of the fact that the man, William Flowers, is not only gay but married to his partner, Jim Evans.

.... So if, for example, William wants to visit his mother in the hospital (where she’s been for several weeks), he can’t leave his kids at home with his husband. As written, the injunction also prohibits male doctors, teachers and pastors from being alone with the children.

Attorneys who practice family law in Texas point out that in cases of abuse, it is common for courts to prevent children from being alone with specific people. But those same lawyers say that they’ve never heard of a case in which a step-parent or long-term partner is permanently enjoined from being alone with his or her step-children when abuse is not even alleged, let alone proven. No lawyer consulted for this story has ever heard of an order which prohibits children from being left alone with an entire gender.

Are all Americans potential child abusers or are they just paranoid?

The other day I came across a case where a couple were nearly arrested by a policeman on an American beach for allowing their two year old daughter to take her top off. As far as I can work out this law is to protect children from being sexually molested. But that's just silly and completely removes the duty of care parents have towards their children. It's also using a hammer to crack a nut and would be regarded as a major attack on human rights (and commonsense) in Europe. We would also regard it as sexist as I doubt that the same rule applies to equally flat chested young boys. Logically, the justification for such draconian measures should lead to the compulsory wearing of the Burka by all American women to prevent rape.

Furthermore, I don't see how making a female toddler cover up will make any difference to the perverted mindset of a potential child abuser when it's a national past time to doll little girls up like $1000 whores, complete with full make-up, and then parade them in beauty contests. 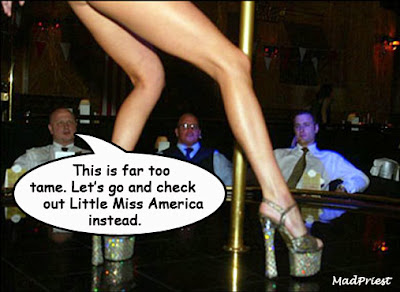