Mexico City motorists should take it upon themselves to rid the capital of cyclists by "flattening" those that get in their way, economic analyst Angel Verdugo, commentator for the Mexican radio program Reporte 98.5, said.

These cyclists, especially those participating in the Ecobici bike-sharing program, which was launched last year, are "a plague," Verdugo said.

"They think of themselves as "Europeans; they think they're French ... and that they're in Paris" but they forget they're Mexicans with all that that implies," Verdugo said.

The commentator urged motorists to respond by "launching their vehicle immediately and not giving them any chance, to see if they'll understand."

"This new plague is going to cause major damage in the Federal District and, therefore, I ask you, please, throw your vehicle at them and flatten them. Cyclists are savages and the rule of 'spare the rod spoil the child' must be applied," Verdugo said.

Mexico City's government, which has sponsored programs aimed at increasing bicycle use for the past four years, immediately fired back at Verdugo and termed his remarks "backward."

COMMENT: Well, you know, I think they're both right. Verdugo is right in encouraging motorists to run down cyclists and Mexico City Government is right in reminding drivers that after they have run down a cyclist they should reverse "backwards" to make sure the cyclist is well and truly flattened. You have to watch these cyclists, they're tough little buggers and will quite often just get up and cycle away after just the one running over. 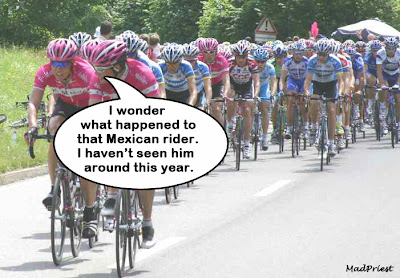