Those of you who have been hanging around The Neighbourhood for a few years will remember the Great SPCK Scandal in which American businessmen, Phil and Mark Brewer, bought up the respected, British Christian bookshop, chain, SPCK, and managed to run it into the ground within months of taking it over. Their actions resulted in a lot of pain and suffering for the shops' former employees and even led to the suicide of one, popular bookshop manager. Condemnation of their unchristian actions resulted in the brother's sending cease and desist notices to perfectly decent people like blogging cartoonist par excellence, Dave Walker (who is a sweet guy who never did not deserve bullying in such an aggressive manner). Mark Brewe even went through a phase of bombarding OCICBW... with threats (yeah, like that stopped me calling these obviously dodgy hatchet-job asset strippers to account).

Therefore, it was with satisfaction and a sense of justification (albeit one tinged with sadness at all that was lost, especially that poor man's life) that I read the following news report today. This may well be the final page of the tragic saga in which two men managed to destroy a British institution and many lives along with it and also brought scandal on the Orthodox Church in my country and abroad.

From THE NORTHERN ECHO:

Six Durham Cathedral bookshop workers have been awarded a total payout of nearly £28,000 after successfully suing its former owners for unfair dismissal. An employment tribunal held in Newcastle yesterday found the six, with 90 years’ service between them, were unfairly dismissed by American brothers Phil and Mark Brewer when they suddenly, and unexpectedly, closed the shop, in January last year.

Joan Cummins, one of the six, said: “I’m so delighted. It was never about the money. We’ve got our justice.”

Having taken over the bookshop, once described as the best in the world, in 2006, the Brewers were accused of running it into the ground.

Mrs Cummins said: “It was an absolute disgrace. We had no stock whatsoever. We were ashamed of it.”

The cathedral reopened the shop on March 1 and continues to run it. All six staff still work there.

After yesterday’s hearing, Mrs Cummins, 61, said: “We hope we never see the Brewers or their like in the cathedral ever again.”

Saint Cuthbert, (an Orthodox saint), whose bones lie in the cathedral, was not available for comment. But reliable sources inform me that he was skipping around heaven yesterday with a huge, satisfied grin on his face.

Sam Norton and all the other bloggers involved in not letting the Brewer Brothers get away with it, should give themselves a hearty slap on the back. The bad guys may not have been completely defeated, they rarely are, but they were seriously wounded this time, thanks to you lot. 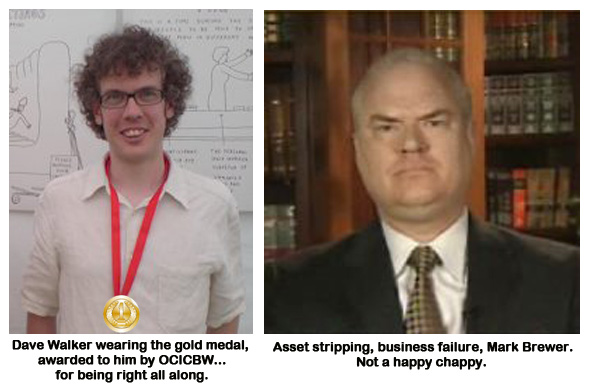