Burger giant McDonald’s chose to fake the Swedish countryside in their latest commercial, in which the company highlights Swedish agriculture, and their own cooperation with Swedish farmers.

It now turns out that the commercial was actually filmed in the Czech Republic, as the Swedish landscape "didn’t work."

In a separate, but equally stunning, revelation it has, at last, been made public that, far from being typical Swedes, the pop group, ABBA, were, in fact, from a small village called Ping located in the Chinese province of Inner Mongolia.

"We always wanted to perform in the Eurovision Song Contest," explained the group's spokesman, Bjorn Borg. "So we lied about our nationality. When we won we couldn't reveal where we were really from as they would have disqualified us. So we pretended to be Scandinavian for the rest of our musical careers. It was okay except for the open sandwiches we were forced to eat which are nowhere near as tasty as a fresh pony burger. We did miss them."

The president of the European Union, Mr. Terry Wogan, has expressed personal shock and grief on hearing the news.

"If you can't trust a Swede who the hell can you trust?" he asked members of the European Parliament sitting in Strasbourg.

Sweden has been banned from taking part in the European Song Contest for the next three years and the BBC has withdrawn the programme, "Wallender" from its schedules as a protest against the deception.

In yet another bomb shell expose it has been revealed that the founder of IKEA was a Nazi who believed that "Hitler was the saviour of Europe." And this is actually true. 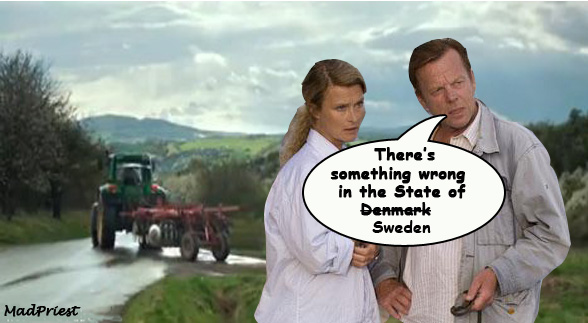