This interview caused a minor furore in the UK recently with David Starkey being accused of racism. Of course, he wasn't being racist, he was just stating an uncomfortable fact.

Back in the late 70s and early 80s, black kids, born in the UK, spoke with the accent of their home region or spoke posh. Black Country lad, Lenny Henry, is the perfect example of how strong, geographical accents are picked up quickly by young people living in an area (I expect because they want to "fit in" with their peers) even when the accent of their parents is from a different geographical region.

But, at the beginning of the 80s something very weird started to happen in the UK. Firstly in inner city, London, and then spreading to other large cities, young, black people (especially males), who had previously spoken like their white, British contemporaries, started to adopt a bastardised, Jamaican patois. It was about the time of the riots in the UK which were primarily a response to the institutionalised racism in Britain. Because of the failure of white people in the UK to treat black people as equals within society, young, black people turned their back on the concept of integration and chose, in stead, to claim for themselves primary allegiance to an idealised and cherry-picked, "black," cultural identity. At the time this was disappointing for those of us who had been wholeheartedly pursuing a melting pot remedy to racism but we understood their decision and were certainly not fearful of it. Back then, the cultural icons of young, black people in the UK were mainly Jamaican musicians such as Bob Marley who sang about peace and reconciliation as well as trying to make black people proud of their own cultural identities and confident of their capabilities. The other major influence on black, youth culture in the UK was the success of black people in music, films and comedy in the USA. All this was very positive. Performers, such as Eddie Murphy and Aretha Franklin, were black and proud of it and their extreme talent helped to dispel the bigoted view of black people being less human than white people from the consciousness of many white people in the UK, especially the young.

Then, a bad thing happened, that completely upset the liberal, hippy applecart. Performers within the US hip-hop culture stopped rapping about "hotels, motels and holiday inns" and started to get aggressive. Rap lyrics started to become racist rather than encouraging and aggression towards society was promoted by the glamorizing of crime, even violent crime. In Jamaica, roots reggae had given way to dancehall and this too had taken a negative turn with boasting, sexism and homophobia becoming a mainstay of the lyrical repertoire.

What happened next in the UK was even stranger. Firstly Asian youth and then white youth began to listen to rap records. This was not surprising as white youth in the UK have been fans of black music since they first discovered jazz and blues. What was surprising was that they started to talk in the same patois as their black contemporaries. Previously, British, black music fans had revered black people, now they started to identify with them. This is something humans do occasionally. You get Australians pretending to be natives of the deep south of the USA. The French went through a period of pretending they were Scottish. Usually it is just harmless fun. But British youth, of all ethnic backgrounds, decided to idealise one aspect of black culture at just the time that it was going through the most nihilistic expression of itself, namely the promotion of gangstaism with its selfish, sexist, vengeful and "dog eat dog" world view.

When I was a teenager I was fanatical about music. I loved soul music, reggae and, when it arrived on the scene, punk rock. My love of black music greatly influenced my attitude towards black people to the extent that I fought against fascist skinheads in running battles on Brick Lane and elsewhere. My love of punk rock was probably responsible for my iconoclastic personality and suspicion of institutional authority. Young people are influenced by the lyrics, public pronouncements and lifestyles of the musicians they listen to, either directly or second-hand through peer pressure. Those who downplay the influence of music in the lives of the young are dangerously wrong. Heck, if academics can claim that the troubadour movement of the middle ages could influence the thinking of Europeans at the time, then we should be open to the idea of similar influences today. David Starkey is a historian and he will have a better understanding of how such influences work than any trendy politician or liberal talking head.

So, I agree with Starkey. I have been saying for a long time that hip hop culture is a very bad thing. It encourages an ungodly view of life and, especially, other people. It also portrays black people as unintelligent, bigoted thugs and, in doing this, it has caused irrevocable harm to the "peace process" between the races.

But, as a historian myself, I want to take all this back one stage by asking the question, "Why?".

Why are some young, black people and their white and Asian wannabe contemporaries, promoting such a destructive, evil lifestyle and taking it to the streets of the UK?

I do not think it has much to do with black people being treated unjustly within Britain. Black people throughout the Western world have been treated unjustly for centuries and, previously, they have managed to retain their dignity and moral righteousness (in fact, it has been this that has won them their greatest gains in equality). I also do not think that it has much to do with black culture as gangstaism and bigotry are not specifically black expressions of cultural identity. Ironically, I believe that hip hop apes white culture, in particular the culture of white, Western capitalism. The gangs on our city streets are not a living out of African tribal customs, they are the living out, within context, of the practices of modern day, big business. Young people, of all races, see the callous way that the fat cats of industry render their employees jobless and hopeless just so they can make more money and live more obscenely extravagant lives; they see how the lives of other people are expendable in the pursuit of personal profit, they see how the rich are not held accountable for their crimes against humanity and they conclude that if the high and mighty can prosper from such self-centred violence against society, then they have every right to do so themselves.

Margaret Thatcher and Ronald Reagan caused the recent riots in England. And, everybody who bought into their Randian dream stoked the fires.

POSTSCRIPT 1: The North East of England is the poorest region of England. Yet, during the recent unpleasantness, there were just a handful of arrests for inciting criminal behaviour via Twitter and Facebook. There were no riots. In fact, thousands of young Geordies swamped the social media with demands that there should be no rioting because Geordies are proud of their city.

Newcastle Upon Tyne is not what you would label a multi-cultural city.

POSTSCRIPT 2: This is an article, not a book. I have painted with broad brush strokes to get my point across within the constraints of a blog post. I am perfectly aware that cultures are multi-faceted and hip hop is only representative of a very small proportion of the black population of the world. I know that not all rap lyrics are from the dark side. I am also aware that cultures are made up of individuals with their own unique beliefs and experiences. I am even prepared to consider the possibility that not all leaders of commerce are bastards, although, so far, I have not come across any convincing evidence to the contrary. 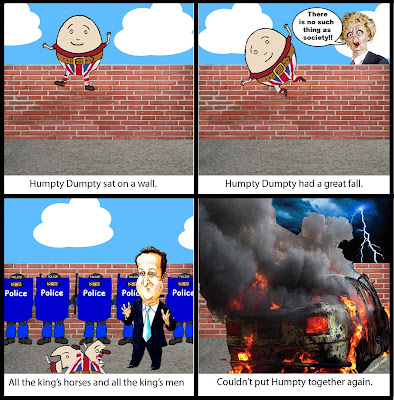 Thanks to LaBiscuitsnapper for posting the link to the video and Chelliah Laity whose own post on this matter got me thinking about it for myself.