From THE SAN FRANCISCO SENTINEL:

The Roman Catholic Archdiocese of New York called a new city requirement that sex education be taught at all public middle and high schools “troubling” on Wednesday, and some Catholic officials said they would advise Catholic parents not to let their children participate.

COMMENT: I see their reasoning. They don't want the altarboys finding out the technical names for what "Father" has been doing to them. It might lead them to consider suing the church. 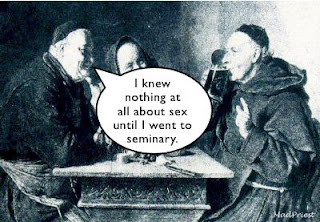