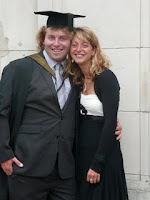 Posted by Kathy at
KNITTING WITH MY SHOES OFF:

Zach is finally a graduate! We went to the campus today so he could find out just where his diploma was and they told him it would be the end of the month before he got it, as his last name begins with a W and they issue them alphabetically. We got home to find it in the mailbox. So his date of graduation is May 2011 and he graduated with honors. He missed magna laude by .002. Drat!

On July 15, 1969, I gave birth to a baby girl. She was beautiful then and she still is. We are very proud of the woman she has become and I look forward to seeing what she can accomplish in the future. She has given us four gorgeous, wonderful grandchildren; she went back to school several years ago and became an R.N., and she loves her work.

Please pray for a friend of mine who has pretty much been forced to resign from her job due to some really nastiness directed against her after she blew the whistle on a sex abuse incident. Her husband and herself now have a very uncertain future ahead of them which will definitely include having to move home.

Please pray for my friend, K, who is suffering from an attack of gout and a bad cold at the same time and is feeling well miserable. This is particularly unfair as my friend has done none of the enjoyable things that are stereotypically the cause of gout.

Joe has now been discharged and is resting at home. He has an appointment next Thursday (21st) at the Cross Cancer Clinic to plan what they are calling 'palliative care'. He is still very thin and very tired, and as far as I know no one in the medical profession is holding out much hope for a cure.

Thanks for your prayers.

Blogging will resume when this stomach bug departs my innards.

Dear head and neck,you have held me hostage for two full days now, unable to remain upright for more than an hour without excruciating pain. I don’t know if it’s just that you’re in spasm or if something more is going on, but cut it the heck out already, okay?

My kids don’t live with me full-time, but spend their weeks with their mum in North Wales. This week, my son, who is nearly fifteen, has been on the end of extreme homophobia after he went on a church sponsored walk in a rainbow flag and tutu.

He was Photoshopped out of the church pictures for being gay (I have no idea what his sexuality is, or may be in the future, as this is pretty irrelevant). When he challenged this, the church said that they cannot be seen as promoting homosexuality as it is an abomination. He then told them that his mum is gay and they said that she is an abomination as well

He is no longer attending the ” fucking bigot” church (his words).

So there we have it – the Welsh church is homophobic to kids.

I think I’m sharing this because I want homophobia to be stamped out in the church and seen as not acceptable.

I guess my son, who describes himself these days as a Secular Jedi, will be even less interested in Christianity after this.

The Chinese government on Saturday called on the United States to cancel a planned meeting between President Barack Obama and the Tibetan religious leader the Dalai Lama, warning that it would “damage” relations between both countries.

“The issue regarding Tibet concerns China’s sovereignty and territorial integrity, and we firmly oppose any foreign official to meet with the Dalai Lama in any form,” Foreign Ministry spokesperson Hong Lei said in a statement.

Syrian security forces have opened fire on anti-government protesters in cities across the country, leaving at least 28 people dead. At least 16 people died in the capital, Damascus, where about 20,000 took part in protests.

KANDAHAR, Afghanistan - After the last prayer of the Thursday morning memorial service for President Hamid Karzai’s slain half brother, as the guests stood to leave for lunch, a bomb hidden inside a man’s turban detonated, killing at least four people and wounding 15.