It's probably just a phase he's going through brought on by the realisation that he's getting closer to meeting his maker as every day passes, but the Archbishop of Canterbury has told General Synod that he has decided that he wants to become a Christian. Evidently during his recent trip to The Congo he met some black people and, as is often the case with middle class, white liberals, the experience made him go goose-pimply all over. He also discovered the true meaning of love whilst he was there, which is making a big thing out of rescuing little children whilst condemning any adult that is in the slightest bit different from the tribal norm to everlasting damnation preferably brought on by a bit of judicious queer bashing and the like. 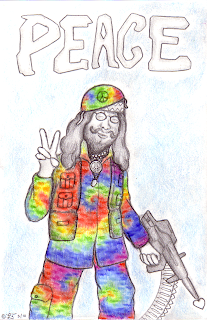 Anyway, the whole back to Africa experience has left him "thinking that there is nothing on earth so transforming as a Church in love."

Of course, that would be a Church in love with a peer appointed leader who brooks no dissent and who isn't afraid to put the boot into his best friends publicly whenever some bigot with a bit of influence over a load of other bigots starts mouthing off like Adolf Hitler.