New York Archbishop Timothy Dolan says he's worried that the next step in the marriage debate will be another redefinition to allow multiple partners and infidelity. Writing on his blog Thursday, Dolan also lamented the anti-Catholic venom that surfaced in the gay marriage battle, saying he's worried that "believers will soon be harassed, threatened, and hauled into court" for their convictions.

He also apologized to those in the gay community who may have been offended by the church's stance, saying he's honored that so many gays are at home in the Catholic Church and that his goal from the start was "pro-marriage, never anti-gay."

COMMENT: Either Dolan has a very low IQ and is incapable of rational thought or he is an evil, conniving scaremonger who is willing to say anything, no matter how obviously deceitful, in order to influence the political decisions of the people of the United States.

The man is a living parody of the body of Christ. He is the antithesis of Christian humility. I mean, just look at this photo. It makes me sick. 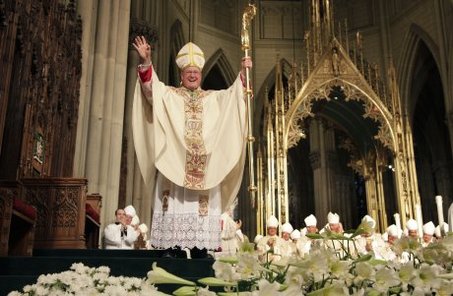