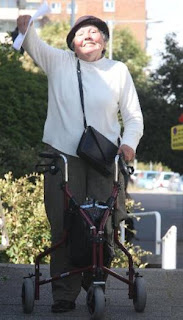 Edna Beck, who walks with a Zimmer frame, tormented people living in her block of flats in Hove. Police reports dating back to 2004 revealed she shouted out “Heil Hitler” a number of times. Youngsters were described as being “terrified” of her and she asked a group playing outside if they were “Hitler's children”. Grey-haired Beck also insulted gay people, Muslims, Jews, Germans and Poles. On one occasion she threw her soiled underwear out of the window. She also pushed over a visitor's motorbike, threatened to punch people and stole or hid neighbour's post. She would also scrawl graffiti on people's mail. She made Nazi salutes and on one occasion goose-stepped behind a visitor. She would shout and sing for up to six hours.

But yesterday she was handed an interim antisocial behaviour order by Brighton Magistrates' Court and told to behave.

Speaking outside court, Beck said, “I'm not antisocial. I'm a normal woman and everyone can tell you that.”