The sickness that has plagued Sydney Diocese due to the ecclesiastically unhygienic habits of carrier, Typhoid Peter, has spread to Adelaide and is rapidly taking hold of those members of the Anglican church there who are most susceptible to contagion because of existing latent bigotry. 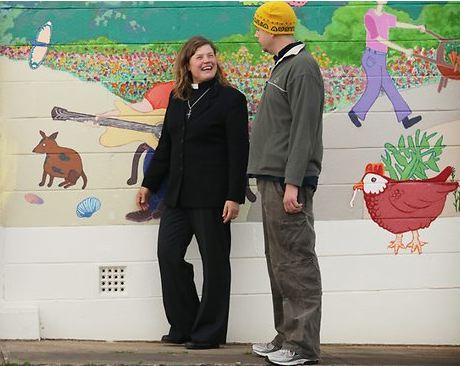 The Rev Ali Wurm - who announced last month she was leaving Semaphore's St Bede's Anglican Parish after being subjected to bullying and threats related to her sexuality has called on senior Anglicans to show stronger leadership to resolve internal tensions surrounding the issue. She says the Anglican hierarchy must advocate for equality of all church members - regardless of gender or sexuality - to avoid further discrimination for gays working in the church and among the congregation.

"There must be full inclusion at all levels of life within the Church, and not just allow gays and lesbians to sit at the pew and toss money into the collection bag. We need to ask ourselves, as a church, what do we stand for - does the organisation stand for social justice or is it just a heterosexual sect? People who are supportive of a church that excludes gay and lesbian members from holding leadership positions within the church need to question what are they afraid of. I've lost the confidence and faith in the leadership's willingness to take risks and to put the issue of social justice before supporting a distorted and false notion of unity."

Dr Ogden, who worked with Ms Wurm from 2002-04 during his tenure as Dean of Adelaide, said her resignation would reverberate around the nation.

"(It is of) national significance because it raises questions about the kind of Church we feel called to be in, in the 21st century. It is important to revisit issues concerning gender and sexuality but this has to be more than an intellectual debate because it's about real people." he said.

Ms Wurm will preside over her farewell service at St Bede's on August 21.

Archbishop Driver, who has refused to comment on the matter will preside over the funeral of Christianity in the Anglican church in Adelaide sometime in the near future.

Archbishop Driver's leadership has come under scrutiny after last month's resignation of the first female Dean of Adelaide, Sarah Macneil, who told parishioners she could "no longer work with integrity at diocesan level".