Naguib Sawiris, a Coptic Christian and billionaire telecoms mogul has been accused of ‘making fun of Muslims’ after he tweeted a cartoon of a bearded Mickey Mouse and Minnie in a full-body ‘niqab’ veil.

One Facebook group has said: 'If you are really a Muslim, and you love your religion, boycott his projects. We have to cut out the tongue of any person who attacks our religion.'

In 2007, Mr Sawiris was criticised for comments against niqabs. ‘When I walk in the street, I feel like a foreigner,’ he said. 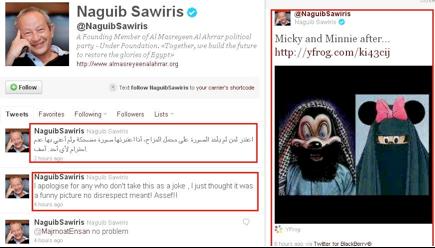 COMMENT: What do you think? Should Naguib Sawiris be cast out of society after having his tongue removed for taking the name of Mickey Mouse (peace be upon him) in vain? Should all micky taking of popular cartoon characters be regarded as blasphemy? And one last question: WTF is up with the world, Doc?