A bill which would ban halal and kosher slaughter methods has passed through the Dutch parliament, despite opposition from Muslim and Jewish groups who say a ban would impinge on their religious freedoms. The bill, which was passed overwhelmingly by parliamentarians on Wednesday, still has to pass through the Dutch senate, which is unlikely before the summer recess.

If the Netherlands outlaws procedures that make meat kosher for Jews or halal for Muslims, it would be the second country after New Zealand to do so in recent years. Luxembourg, Norway, Sweden and Switzerland also ban religious slaughter.

Both halal and kosher slaughter rules prescribe that animals' throats must be cut swiftly with a razor-sharp knife while they are still conscious, so that they bleed to death quickly.

COMMENT: It is overwhelmingly believed by the native peoples of Western Europe that halal and kosher slaughter is more cruel than current secular methods of slaughter. It is also generally agreed by all citizens of Western Europe (bar a few psychos and far too many blood sport enthusiasts) that if an animal is to be slaughtered for human consumption then it should be done in the most humane way that is feasibly available. This is a moral matter.

Most of us who hang around this Neighbourhood believe that it is cruel to bar same sex couples from the right to marry. We believe that doing so is inhumane and that no religious belief should get in the way of getting rid of the pain suffered by same sex couples who are not allowed to marry at present.

Therefore, any regular reader of this blog should agree wholeheartedly with the Dutch decision. 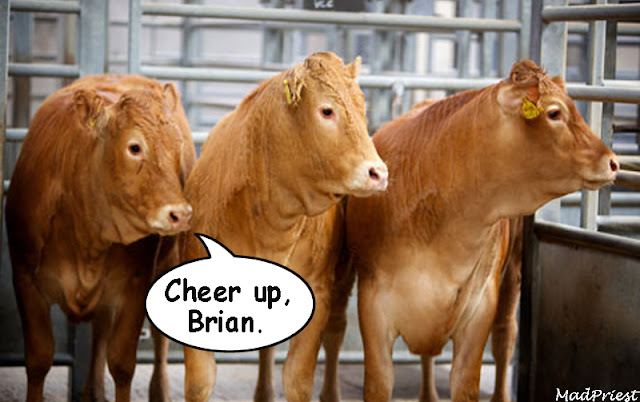