From THE NIGERIAN OBSERVER:

Amy and her friends would have the world believe that the church in Africa is made up of super-Christians, especially when compared with the church in the developed world.

With a few notable exceptions, the African church is more connected to the corruption and graft of the secular world than even the established Church of England at its most grovelling. The homophobia of the Nigerian church is just another expression of an unenlightened, pre-modern, immoral mindset that also encourages its bishops and leading laity to believe that handing out gongs to the political thugs that keep Nigeria stuck in an eternal dark ages is a righteous thing for the Bride of Christ to be engaging in. The truth has to be told and damn the consequences - the Nigerian bishops are tin pot generals in a tin pot church in a tin pot country run by tin pot opportunist grifters masquerading as politicians. The fact that Nigeria is going to hell in a hand cart is nothing to do with a lack of foreign investment and everything to do with the fact that nobody wants to do business with such a backward and corrupt people other than other corrupt people.

Of course, there are perfectly decent, honest Nigerians. I know this because most of them have managed to escape to England. 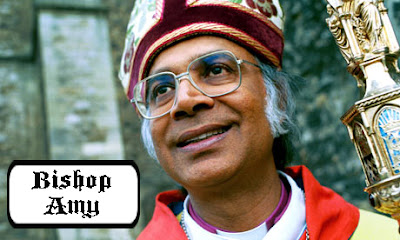