Remember that lump I had in my neck? It's benign.

I had an ultrasound scan today and I thought I'd have to wait to see my own GP who sent me for it to find out the results but the doctor told me when he was doing it. It turns out it's a benign thyroid tumour and I have a matching one on the other side too - although that's smaller.

I have to go and see my own GP but the doctor seemed to think that if it wasn't giving me any problems nothing would have to be done about it - which suits me fine.

Posted by Beartoast at BEAR ME OUT - THE MIND OF A BEAR:

Through some interesting turns of fate and providence, I will be moving. A house has become available through the kind generosity of some of my constituents. I'm invited to live there, paying only utilities. My [one-way] commute to work will be 2.2 miles (instead of 18.6 miles). Instead of a 30 minute drive, it will be 10 minutes, on a busy day. There will be room for my genetic offspring to visit, spend the night, make a meal, watch a movie, and have good daddy time. Important stuff right now.

MPs voted to ban wild animals in circuses last night after David Cameron's attempts to bully Conservative backbenchers into voting against the measure backfired and ended in a humiliating public defeat. In a decision hailed by campaigners as an "historic victory for animal welfare and protection", MPs of all parties unanimously backed a ban and the Government signalled that it would introduce one, ending forever the days of lions, tigers, elephants and other wild animals in the big top.

We pray for Kirstin and Andee.

You were greatly supportive of me and my family in the autumn of 2008 when you added my sister Judith to the Prayer List. It has been up and down since then for her, but she never regained the independence she so enjoyed. She suffered a massive cerebral hemorrhage in March and had taken small steps in recovery until the first week in June when she was hospitalized for respiratory difficulties.

While hospitalized she achieved her goal of being received into the Episcopal Church. Along with her sisters she had joined the Parish of St. John's Cathedral in Jacksonville, Fl last September. All three were taking a course in Basic Anglicanism taught by Dean Kate Moorehead and all three were scheduled to be received on Pentecost. Her sisters were received at the Cathedral, she was received in a small service held in her hospital room that afternoon. Dean Moorehead arranged for the Bishop of Florida, a Chaplain and a Verger to join her at Judy's bedside along with her sisters and two friends. The Dean conducted a short service, the Chaplain gave Judy communion. The Bishop then discussed her faith journey with Judy and received her into the Church.

On the fifteenth she was transferred to a rehab hospital. She died there this morning in her sleep into the Glory of eternal life.

In the sure confidence of her salvation, please keep her sisters and caregivers, Cate and Ginny, all her family and her friends in your prayers as we move forward.

Sadness and happiness - the human condition. Judith's friends and family, and you dear friend, will be in our prayers today. May there be more happiness than sadness as you remember her and make your (temporary) farewells over the coming days.

I would appreciate it if you would continue regularly to ask on 'the prayer list' for prayers for my colleague and friend Rev. Joe Walker. I can't really post detailed daily updates because the family are asking for some privacy about specifics, but suffice it to say that he has sudden and serious cancer, that he is in his forties with a wife and four young children and that(his condition is very serious indeed). Thanks so much for this.

For the second year running, Anglicans in Zimbabwe have been forced to find another place to mark the memorial of African martyr Bernard Mizeki after being denied access to their official shrine. Last year worshippers, who had travelled from all over the country, were driven away by the Zimbabwe Republic Police despite assurances from the government that they would not be disturbed or harassed.

Bishop of Harare, the Rt Revd Dr. Chad N. Gandiya called on members of the Anglican Communion to pray for the safety of the pilgrims who travel to the Marondera Show Ground this coming weekend.

The Anglican Church in Zimbabwe is under attack from an ex-communicated bishop, Dr Norbert Kunonga, a supporter of President Mugabe. Kunonga, with the support of police and henchmen, has seized CPCA church property and used violence to break up church services.

“Anglican lay people, their clergy and bishops are threatened and brutalised by members of the police with political support for continuing to worship Christ as Lord in their own churches and for speaking out for the poor and vulnerable,” said Bp Chad. “They are warned to conform and their lives are threatened. 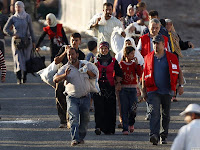 More than 1,500 Syrian refugees streamed across the border to safe havens in Turkey in one day as Syria's 3-month-old pro-democracy movement braced for another day of mass protests Friday.

A powerful 7.3-magnitude earthquake shook Alaska's Aleutian Islands late Thursday, triggering a tsunami warning that sent people heading for high ground before the alert was canceled. Hundreds of people walked, drove and rode in the back of pickup trucks as they fled the the coast after the earthquake struck 80 miles (130 kilometers) northeast of the seafood port of Dutch Harbor, home to some 4,400 people. There were no immediate reports of damage or injuries in near the remote island chain. Fire engines and police cars drove up and down the hillsides telling residents it was safe to return to their homes.

A Sudan analyst says he has seen evidence Northern Sudanese security forces are going door to door, executing hundreds of civilians in the country's south in an act of ethnic cleansing.