We pray that the grace of God will touch the lives of our friends, Kirstin and Andee, and bring them peace.

From the Gorgeous Allie (so young and yet one of my most longstanding blogger friends):

I feel a bit odd putting myself here, but I'm getting married on Saturday to a wonderful fellow - a Classicist that I actually met in church. Both of us are anxiety prone people, and our families aren't the stablest either, so you can imagine just how stressed we both are at the moment. We are both looking forward to the marriage, but are also but scared sh!tless. Thanks! Allie (Conformist Rebel/Lambeth Steward if you don't recall)"

The shot my good friend, Jay Simser's doctor gave him the other day seems to have resulted in a marked reduction in the pain Jay has been suffering in his arm recently. Hurray and may there be further improvements to Jay's quality of life as he continues with his treatment. Jay blogs at BAILEY'S BUDDY.

I’ve been ill… However, I woke up on Monday feeling different. Better. All of a sudden. Since then I have been doing a bunch of hitherto impossible things and I haven’t crashed… Very strange.

Lesley has been laid low with glandular fever for a long time. Pray this is the beginning of the end of her suffering from this stubbornly persistent and debilitating illness.

Posted on his blog by REVEREND REF:

I lost one of my favorites today. Emma, after an extended sightseeing trip, heads back to Mongolia. And so it goes. And life goes on. And I don't particularly have to like it at the moment. Along with Julie and Su, this one also leaves a hole.

KELLOGSVILLE'S life is generally a bit crap and depressing at the moment. She put her back out which resulted in a lot of tiredness, pain and depression. She's had a tiff we HWMBO and to top it all her mother-in-law is about to fly in for a visit. Do pray for healing and fortitude.

Almost a thousand Episcopal teens are gathering in St Paul Minnesota for the triennial Episcopal Youth Event Please pray for thier travels (some will be on a bus for up to 24 hours) and for thier time together Pray also for the wonderful team of youth and adults who have spent 18 months planning this event If anyone would like to follow the events they can check out EYE 2011 PORTAL.

I second what Jay said, one of my daughters will be attending the EYE and then working on some mission projects in the Minneapolis/St. Paul area.

May I ask prayers for my daughter, Claire, her friend Frankie, and Steve who will also be attending EYE in Minn.?

Please offer up your prayers for Rev. DeLong and her chief Defense Counsel Rev. Scott Campbell. I was once a member of Rev.Campbell's congregation. He is a fine gentleman. Thank you.

Further details concerning the reason for your most heartfelt prayers on this matter can be found HERE.

A gay Methodist pastor from western Wisconsin will soon find out her penalty for officiating at a 2009 lesbian wedding. The Rev. Amy DeLong never denied the action, which prompted this week’s church trial in Kaukauna. A jury of clergy convicted her Wednesday.

She was found not guilty of a second charge of being a “self-avowed practicing homosexual.”

The jury is expected to announce the penalty Thursday. It could range from a suspension to defrocking.

The Government is to close its Central Office of Information, set up originally in 1946, which union leaders warned will threaten the loss of 400 jobs. There had been no consultation or warning to staff about the likely redundancies. Employees at the COI's London head office would bear the brunt of the cuts.

Bishop Andudu Adam Elnail of Kadugli is calling upon Christians worldwide to pray and fast ahead of South Sudan’s secession next month. He has warned of a possible “genocide” in the Nuba Mountains region, where violence has broken out in recent weeks. The region, home to many Christians, will remain under the control of Khartoum and the Muslim North when South Sudan gains its independence on July 9. As Sudanese tanks and artillery move in, hundreds of thousands of Nuba are fleeing their homes and development agencies have withdrawn their staff. 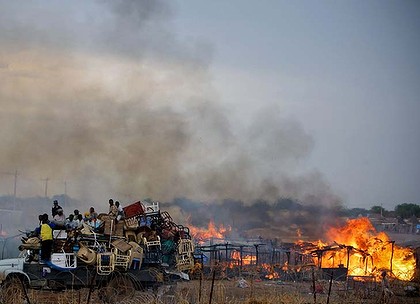