It may be okay to be gay in the Episcopal Church now but we must not be complacent as our sisters and brothers in other churches throughout the world, and even in the USA, are still being martyred by the haters everyday.

A growing number of pastors in the United Methodist Church say they're no longer willing to obey a church rule that prohibits them from officiating at same-sex marriages, despite the potential threat of being disciplined or dismissed from the church. 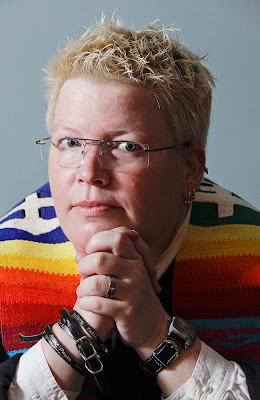 While trials of pastors who conduct same-gender ceremonies have only occurred once every several years, the threat is real. The Rev. Amy DeLong, of Osceola, Wis., faces a three-day trial starting Tuesday in Kaukauna on two charges: violating a church prohibition on the ordination of "self-avowed practicing homosexuals" and marrying a lesbian couple.

The jury for the church trial will be selected from a pool of Wisconsin United Methodist clergy. A total of 13 clergy will be chosen to serve during the trial and penalty phases.

DeLong said she told her supervisors years ago that she was in a lesbian relationship. She said her efforts to live halfway in the closet and halfway out took such a toll that she finally decided to break her silence. She agreed to marry a lesbian couple in the fall of 2009, and she didn't mince words when she reported it in a required ministerial report. Eventually the church filed two charges against her.

"I would be lying if I said this process hasn't been difficult, but I also feel called to break the silence and tell my own truth, regardless of the consequences," said DeLong. "When I entered (the ministry), I did not suspend my conscience. It's incumbent on me not to perpetuate its unjust laws."

Here is an update from last night: