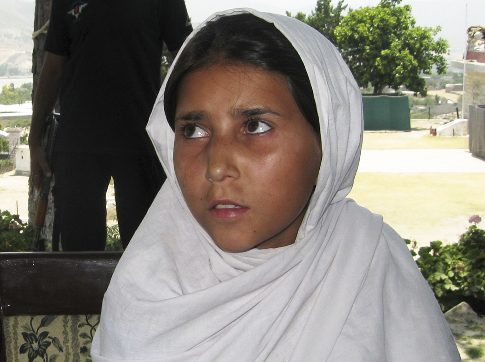 A nine-year-old girl who says she was kidnapped by militants in Pakistan and told to be a suicide bomber was reunited with her parents Tuesday. The girl, Suhana, was kidnapped on Sunday by two men with weapons and two women wearing burqas. She was on her way to school when they seized her and drugged her.

Suhana was driven to the Darra Islam checkpoint in Pakistan's Lower Dir district and told to detonate a suicide vest that the abductors had put on her. Instead of detonating the jacket, after getting out of the car, she started shouting and running towards the paramilitary frontier corps soldiers stationed at the post. She was arrested, her explosive vest was taken off and she was placed in custody.

The Pakistani Taliban have used children as suicide bombers before, but there have been few cases, if any, of children as young as nine.

COMMENT: The thought that men and women can conceive of a god who would rejoice over an obscenity such as this is heartbreaking. The thought that millions of people refuse to condemn these evil people can lead only to utter despair.

Just nine years old, this little girl has the eyes of a woman who has lived a hundred years in hell. Sometimes I wish for our obliteration from the face of the earth.