Who is this man?

The young Rowan Williams was once labelled 'a subversive' by a senior MI5 officer over his involvement with a group of Marxist, Trotskyite and socialist campaigners. The secret briefing papers were seen by then Prime Minister Baroness Thatcher and circulated to MPs. The future head of the Church of England first came to the attention of the Security Service when he helped found a left-wing Christian group during his student days at Oxford University. He wrote the original manifesto for the Jubilee Group, claiming capitalism was in its death-throes and "threatens to inflict even greater violence on mankind than it has done before. We must make our stand with the oppressed."

The Jubilee Group was identified as a "problem" neo-Marxist organisation in confidential intelligence documents drawn up by MI5 officer Charles Elwell. He warned of "the problem of Christian left wing groups" and named the Jubilee Group as "the best known and probably most influential". Shortly after his analysis of Dr Williams' group was published, the Prime Minister said the Jubilee Group was "the most subversive group within the religious community in England" and one newspaper referred to it as "a bunch of neo-Marxist trendy clerics."

The group helped oversee a series of campaigns against the introduction of the poll tax, the violent trade union dispute over Rupert Murdoch's decision to move his newspapers to Wapping and the US nuclear base at Greenham Common. 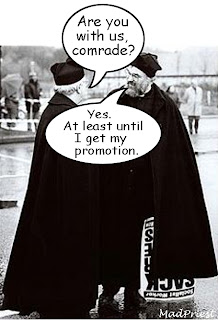 COMMENT: Who'd have thought it? Me and the boss on the same blacklist. I was declared an enemy of the state back in the late 1970s for attending anti-racism demonstrations. I know this because I was turned down for a civil service job because of it. Of course, I've retained my integrity by never selling out unlike the Grand Tufti who has proved himself to be nothing but a foul-weather  socialist especially in respect of his youthful demand that "We must make our stand with the oppressed."