The Archdiocese of Boston commanded St. Cecilia’s Church in the city’s Back Bay neighborhood not to go forward with a mass for GLBT people of faith over Pride weekend. But the spirit could not be suppressed: Local gays, and the church’s pastor, spoke out with messages of love and community. The Rev. John Unni made it clear that in his church, worshipers of all stripes would be accepted into the fellowship.

"You are welcome here, gay or straight, rich or poor, young or old, black or white," declared the Catholic priest in the course of the next scheduled mass. "Here, you all can say, ’I can worship the God who made me as I am.’"

"We are not this renegade, crazy, liberal church," Unni told his parishioners. "We’re just Christians trying to live the gospel."

Unni’s sermon was met with "thunderous applause" and a "standing ovation."

The archdiocese spokesperson, Terrence C. Donilon, sought to cast the hierarchy’s response in terms of love.

"The teachings of the Catholic Church are set in stone, but that doesn’t stop us from loving people from different walks of life." he said.

The Boston Gay Men’s Chorus, which celebrated the city’s annual Pride with a concert scheduled for the same weekend, posted a "Response" to the cancellation of the mass on Facebook.

"If you prefer to spread untruths and hate, we still love you - but not your message," the response said.

For having incredibly big balls and the rhetorical eloquence to match, Father John is OCICBW...'s 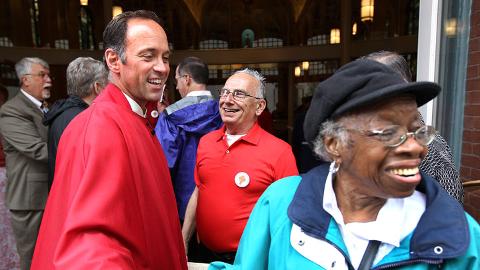 Also mentioned in dispatches are the congregation of St. Cecilia’s Church and The Boston Gay Men's Chorus.

However, this gentleman, Terrence C. Donilon, didn't make the grade. In fact, his shame is compounded by him being awarded the disgraceful accolade of:

MEALY-MOUTHED LACKEY OF THE DAY

Oh well, you have your bed made for you by friends in high places , you have to lie in it, I suppose.