I have no idea why Lesley didn't want to post this on her popular blog but she has generously passed it over to me and I am generously passing it on to you.

New Zealand students have put their school on the map by etching giant phallic symbols onto its playing fields with weed killer. While the stunt took place more than two years ago, its effects coincided with satellites taking photographs of Hamilton for Google Earth. 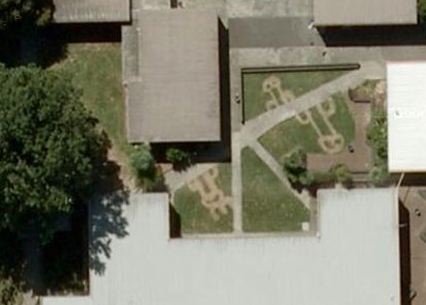 Local resident David McQuoid told the Waikato Times he was online searching for a property when he came across the crude etchings, some of which measure almost 15m long.

"At first I thought it was a large piece of art work," he told the newspaper.

The school's acting principal Gerhard van Dyk was less convinced of the symbols' artistic merit, telling the Times he had been unable to catch the pranksters.

Van Dyk said he would contact Google about removing the etchings but the internet giant told the Times that they could not be blurred, as Google Earth images came directly from satellites, unlike those used for Google Street View.

Online reaction to the stunt on Fairfax Media's stuff.co.nz website was mostly positive. However, there was some outrage, including a reader who posted: "This is not funny, what a sick sense of humour you people have... This shows the twisted minds of today's youth."