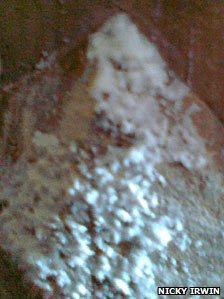 This image of Jesus" seen in dripped wax by worshippers at a church in Wiltshire was created over a four-month period. Nicky Irwin was the church warden who first spotted it.

Unfortunately, the wax image was apparently removed by a diligent cleaner last week. Despite going through the church's cleaning rotas, no-one has admitted to scraping away the wax image.

"I felt really disappointed actually and I wished I'd done more about preserving it," admitted Mrs Irwin.

"The Church of England is not very good at this sort of thing and if I'd done something sooner it could have been a bit of a money spinner."