"Well I don’t believe in religion, let’s put it that way. I believe all religions are bad. I think they’re a waste of time. Jesus was a clever man. He wasn’t the son of God. We all know that he was a very clever, wonderful man and he said, ‘Church is in here,' meaning you are your own church.”
(AC/DC's Brian Johnson from
"Rockers and Rollers: A Full-Throttle Memoir")

Mr Johnson is famous for telling us that he has big balls.

Whether or not Jesus was a god or just a man may be up for dispute. But one thing is for certain, his message was one of extreme altruism and having a relationship with a god who was out there. Nothing is written down anywhere that indicates that the god of Jesus Christ was locked up inside the mind of the individual making excuses for every act of selfish debauchery singing like a tom cat being castrated without anaesthetic can buy.

On the other hand, Maybe Brian is right. Surely, if there is a god, Bon Scott wouldn't have died and AC/DC would have remained a real rock 'n' roll band and not become a comedy act out of the same mould as Johnson's previous group, Geordie. 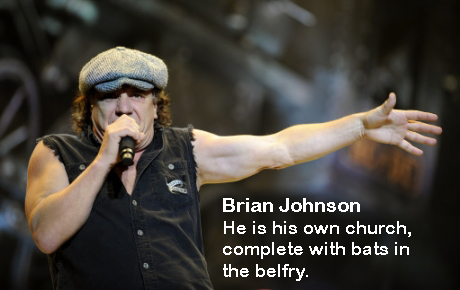