From THE EUROPEAN JEWISH PRESS:

Pope Benedict XVI honoured Sunday Croatia's late controversial World War II Cardinal Alojzije Stepinac as a "defender of Jews, the Orthodox and of all the persecuted."

In "a time of Nazi and Fascist dictatorship", Stepinac became "a defender of the Jews, the Orthodox and of all the persecuted, and then, in the age of communism, an advocate for his own faithful, especially for the many persecuted and murdered priests. His martyrdom signals the culmination of the violence perpetrated against the Church during the terrible period of communist persecution," the pope said.

Earlier on Sunday Holocaust survivors voiced regret over pope's stop at Stepinac's tomb. The American Gathering of Holocaust Survivors and their Descendants labelled the cardinal in a statement as an "avid supporter of the Ustasha."

"Holocaust survivors join all victims of the Nazi-aligned Ustasha regime in wartime Croatia in expressing disappointment that Pope Benedict would honour Cardinal Stepinac. Stepinac was an avid supporter of the Ustasha whose cruelties were so extreme that they even shocked some of their Nazi masters," it said in a statement.

COMMENT: If I was a psychologist I might be tempted to suggest that Benny's mania for pardoning Catholic Nazi sympathisers is nothing more than an attempt to excuse himself from his own dubious connections with fascism. 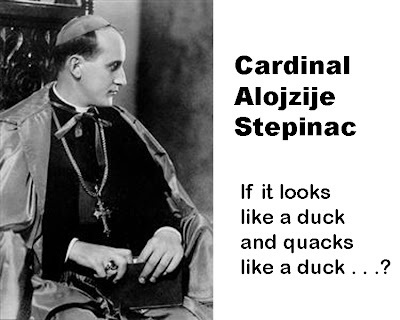