From THE LUSAKA TIMES:

The Anglican Church in Central Africa has re-affirmed its stance against the practice of homosexuality. Anglican Province of Central Africa overseer, Archbishop Albert Chama, said in Kitwe at the weekend that the church would continue to make it clear that it would not condone homosexuality.

He said, “We have made it very clear even to churches around the world that we interact with that if there are any members or priests that practice homosexuality, they should keep them away from us,” he said.

COMMENT: Why? Would the temptation be too much, Bishop? 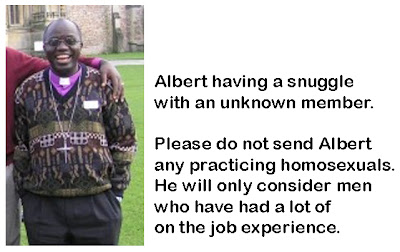