The pope, who is visiting Croatia at the moment, has given the country his full backing for their bid to gain EU membership. This is hardly surprising as Croatia's population is 90% Roman Catholic. The pope's game plan seems to be to persuade the Croatian government to turn their nation into one whose laws are completely in line with Vatican dictates so that the balance of power in Europe will shift towards a Vatican dictatorship if Croatia gets the nod from the EU.

At the moment, women can undergo an abortion up to ten weeks after conception and later with a doctor's permission. In his homily today the pope urged parents to affirm the inviolability of life from conception to natural death, saying "Dear families, rejoice in fatherhood and motherhood!" He also urged them to back legislation that supports families "in the task of giving birth to children and educating them."

Croatia has recognized same-sex couples since 2003 and allows gay partners in relationships of more than three years rights of inheritance and financial support, the same as enjoyed by heterosexual couples who aren't married. There is no gay marriage, however, and gay couples cannot adopt. But at today's papal rally, Monsignor Valter Zupan, in charge of family issues in the Croatian bishops' conference, said Europe had been founded on deeply Christian values about marriage between man and woman, but that these values were being threatened by trends that favor "different types of living together which don't have any foundation in European culture."

"We want our children to continue to call their parents 'mamma' and 'papa' because that's their natural names," he told the applauding crowd. "Children have the right to publicly state that a 'father' and a 'mother' gave them life," he said, adding that the church also had the right to demand the government reverse its abortion law. 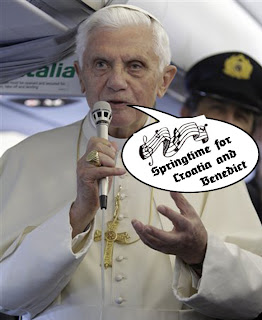 Later Sunday after Mass, Benedict will pray before the tomb of Cardinal Alojzije Stepinac, Croatia's World War II primate whom John Paul beatified during a 1998 trip. His beatification was controversial because he was a Nazi sympathiser.

If anyone is making a documentary film of the pope's visit to Croatia, I suggest an appropriate title would be "Triumph des Willens."