Our prayers continue for our friend Kirstin at BAREFOOT AND DANCING (see yesterday's PRAYER LIST for details). Kirstin has posted on facebook that she has been fitted with an appropriate knee brace and is not in so much pain now. Thank God for small mercies.

Please pray for my friend, K, whose partnership of many years appears to be irrevocably on the rocks. For various reasons the near future seems set to be unpleasant for K and my friend does not deserve this. May God be with K every step of the way and bring K to a place of peace and happiness.

Please pray for Tracie who is suffering unpleasantness within her faith community. On top of this she has potential health problems that are worrying her.

Another Pakistani investigative reporter, Syed Saleem Shahzad, who worked in Pakistan for a news service based in Hong Kong, has been murdered, and his body shows signs of having been beaten and possibly tortured in other ways. Syed Saleem Shahzad had very recently done a news story investigating into why Al-Qaeda had attacked a Pakistani naval base in Karachi on the 22nd of May.

European food-safety investigators are still trying to determine the scope and source of an E. coli bacterial outbreak that has been blamed for the deaths of 16 people and made more than 1,000 others ill, mainly in Germany. Fifteen of the reported deaths have occurred in Germany and one in Sweden - a victim who had recently traveled to Germany - while infections have been reported in Britain, Denmark, France and The Netherlands, also mainly among people who had recently traveled to Germany.

Activists and bloggers are pressing Egypt's military rulers to investigate accusations of serious abuses against protesters, including claims that soldiers subjected female detainees to so-called “virginity tests.” The virginity test allegations first surfaced after a March 9 rally in Cairo's Tahrir Square that turned violent when men in plainclothes attacked protesters and the army intervened forcefully to clear the square. One woman who was arrested spoke out about her treatment, and Amnesty International further documented the abuse allegations in a report that found 18 female detainees were threatened with prostitution charges and forced to undergo virginity tests. They were also beaten up and given electric shocks, the report said.

Hamza Ali al-Khateeb, a round-faced 13-year-old boy, was arrested at a protest in Jiza, a southern Syrian village near Dara’a, on April 29. Nothing was known of him for a month before his mutilated corpse was returned to his family on the condition, according to activists, that they never speak of his brutal end. But the remains themselves testify all too clearly to ghastly torture. Video posted online shows his battered, purple face. His skin is scrawled with cuts, gashes, deep burns and bullet wounds that would probably have injured but not killed. His jaw and kneecaps are shattered and his penis chopped off.

In Syria and beyond, the youth’s battered body has cast into shocking relief the terrors wielded by the Syrian state against its people.

The average price of basics such as wheat, rice and corn are set to increase by between 120 per cent and 180 per cent by 2030 according to the report, "Growing a Better Future" from Oxfam. About 70 per cent more food will have to be produced by 2050 to ensure the world’s population can be fed. Climate change, the sale of farming land in developing countries, speculators who artificially drive up prices and competition for land to grow bio-fuels are all putting the world’s food system under pressure.

‘Without urgent action the future will be one of zero-sum competition between states, resource grabs by powerful elites, and ecological collapse,’ the report concluded.

A 44ft (13m) long whale has died three hours after becoming stranded on a beach on Teesside.

Police alerted the RNLI after spotting the 20 tonne stricken mammal on Redcar beach, just after 0620 BST on Tuesday morning. A rescue bid started which involved trying to keep the adult sperm whale wet until high tide but it died. 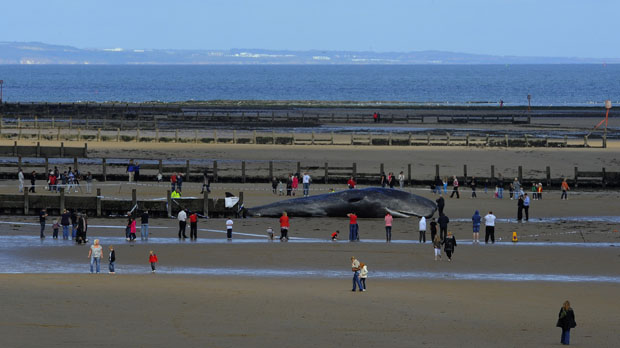