According to a survey of BBC viewers, conducted by the Corporation itself, the BBC is regarded as anti-Christian. The survey found that Christians are portrayed with 'derogatory stereotypes' and presented as 'weak' and 'bigoted'. Arrogantly, the BBC has dismissed the findings of its own report. A spokesman says it 'has strict editorial guidelines on impartiality' and that it 'does not have anti-Christian bias'.

The Mail cites a recent character in the popular soap, "Eastenders", as proof of the shitty way the BBC portrays Christians on their channel.

Thus a prime time series, such as EastEnders, offers a story line of a Christian preacher, Lucas Johnson, who leaves his ex-wife to die, murders his wife's ex-husband, drowns his son's dog, and strangles his wife and locks her in a basement, kills another woman who looks like his new wife.

And then it asks the reasonable question:

Where are the equivalent pro-Christian story lines in their soaps?

In conclusion the Mail points out:

Much of the abuse heaped on Christianity from the BBC - for instance from 'alternative' comedians and soap opera script writers - is the work of Guardianista atheists. But, of course, part of the formula for political correctness of this group is to combine their insults of Christianity with an uncritical approach towards minority faiths. BBC executives have admitted that although they would show a scene where a Bible was thrown away, they would never do the same with a copy of the Koran.

Although the Mail is maligned, with good reason, by politically correct liberals (as opposed to politically incorrect liberals like myself) as being the newspaper of lower middle class, grumpy old reactionaries, it does have a point here and the bias against Christianity is not just restricted to the BBC. There are very few documentaries fronted by Christian scholars on any of the British channels and when a Christian does get a crack of the whip they are invariably closer to Unitarians in their beliefs than the beliefs of an average churchgoer or even an average reader of this blog.

But most of all it is the constant belittling of Christians and even their most innocuous beliefs by comedians on the box that is most damaging to Christianity in my country. Most of our comedians rely on adolescent humour to get their laughs and so they appeal mostly to adolescents and young adults. Of course, being called stupid by a celebrity is the last thing any young person wants and the barrier that the BBC and their co-conspirators in the other TV companies are building between young people and the gospel by employing the Stephen Frys and Eddie Izzards of this world, without employing equally brilliant Christian comedians like myself and Father Christian, is becoming unbreachable. 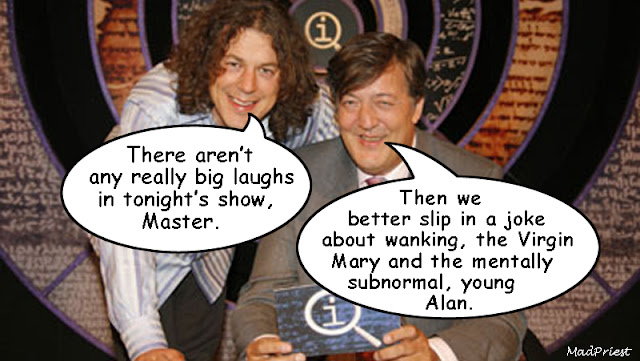