Yes, a hearty congratulations, with just enough envy in my voice to prove my sincerity, to first wave Christian blogger, Scott Gunn, of the SEVEN WHOLE DAYS blog.

The Rev. Scott Gunn has been chosen to lead Forward Movement Publications in its mission to "reinvigorate the life of the church."

Gunn, a priest of the Diocese of Rhode Island, has been named by the board of directors and Presiding Bishop Katharine Jefferts Schori as the organization's executive director.

Forward Movement, the publisher of Forward Day by Day meditations as well as books and pamphlets about spirituality and the Episcopal Church, celebrated its 75th anniversary last year.

Gunn begins his ministry with the Cincinnati-based Forward Movement in late July, according to a June 1 press release.

"Our church is at a critical and thrilling point as we seek to find our way forward in the 21st century," said Gunn in the release. "Forward Movement is positioned well to be a leader in proclaiming the gospel that is at our core."

Jefferts Schori said in the release that "we welcome Fr. Gunn as he joins the work of leading Forward Movement into the next chapter of its ministry."

With a worldwide circulation of more than 300,000 subscribers, Forward Day by Day will continue to play a central role at Forward Movement, according to the release, while Gunn leads the agency in the exploration of new content -- and new methods of delivery -- both to support current readers and to attract new audiences.

COMMENT: I have told him that the first thing he must do is open a branch in North East England. 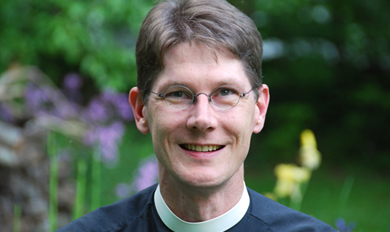