From Tracy at REV RUNS!:

Please pray for my Uncle Linwood who had a stroke last week.

Please include me on the Prayer List as I have a complete workup at Mayo Clinic in Jacksonville, FL. No life threatening things anticipated, just lots of painful things that make life less enjoyable.

There's a young man, whom w/ his wife is soon expecting his first child/ren: twins. He was terribly injured last night (I saw it happen), and facing a long rehabilitation. Please pray for him and his family. His name is Buster Posey, and he's the star rookie catcher for my San Francisco Giants (injured in the game: collision at the plate.)

Eight U.S. troops who died in the latest attack in southern Afghanistan were hit by two different blasts while they were on foot patrol. NATO says the explosions in Kandahar province happened as the troops began to investigate a suspicious object they found on Thursday. The first explosion happened immediately, wounding some of the troops. A second explosion came as others rushed in to help the wounded.

The Georgian capital Tbilisi is tense after an overnight crackdown on anti-government protesters, during which a policeman and one other person died. Nearly 40 people were also injured as riot police cleared protesters ahead of independence day events. 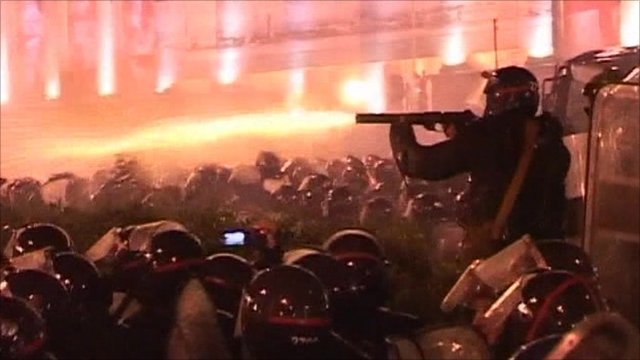 Security forces killed at least three people in Syria on Friday as the country braced for more protests after the weekly Muslim prayers, with pro-reform activists reaching out to the army to join their 10-week uprising.