This is Cardinal Richard Cushing who was the Vatican's man in Boston between 1944 and 1970. 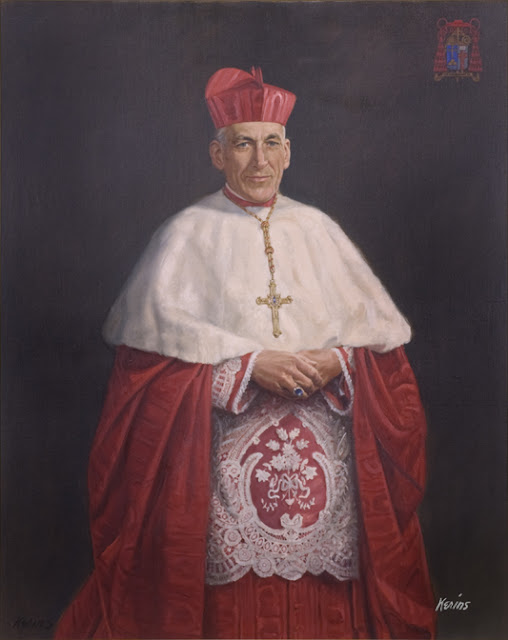 To be fair he seems to have been a reasonably decent bloke. He was one of the prime movers for reform in Vatican II and played a vital role in drafting Nostra Aetate, the document that officially absolved the Jews of deicide charge. The final version of the document reflects his passion and words during the debates that preceded its publication.

We must cast the Declaration on the Jews in a much more positive form, one not so timid, but much more loving ... For the sake of our common heritage we, the children of Abraham according to the spirit, must foster a special reverence and love for the children of Abraham according to the flesh. As children of Adam, they are our kin, as children of Abraham they are Christ's blood relatives. 2. So far as the guilt of Jews in the death of our Saviour is concerned, the rejection of the Messiah by His own, is according to Scripture, a mystery—a mystery given us for our instruction, not for our self-exaltation ... We cannot sit in judgement on the onetime leaders of Israel—God alone is their judge. Much less can we burden later generations of Jews with any burden of guilt for the crucifixion of the Lord Jesus, for the death of the Saviour of the world, except that universal guilt in which we all have a part ... In clear and unmistakable language, we must deny, therefore, that the Jews are guilty of our Saviour's death. We must condemn especially those who seek to justify, as Christian deeds, discrimination, hatred and even persecution of Jews ... 3. I ask myself, Venerable Brothers, whether we should not humbly acknowledge before the whole world that, toward their Jewish brethren, Christians have all too often not shown themselves as true Christians, as faithful followers of Christ. How many [Jews] have suffered in our own time? How many died because Christians were indifferent and kept silent? ... If in recent years, not many Christian voices were raised against those injustices, at least let ours now be heard in humility.

He also had far more sympathy with ecumenism than is currently "allowed" in his denomination. He even encouraged Catholics to attend Billy Graham's crusades.