I have taken a lot of flak over the years in respect of OCICBW...'s trailblazing campaign to get boring old Anglican codgers to accept the ordination of female bishops by putting forward drop dead gorgeous candidates. I have even been accused of sexism on occasion.

However, conclusive proof has now come in that shows that I, far from being a retro chauvinist pig, was once again ahead of the rest of the pack. So let's have no more politically correct squeamishness ladies and please refrain from looking dowdy in public. Remember, an attractive booty is worth a million words. 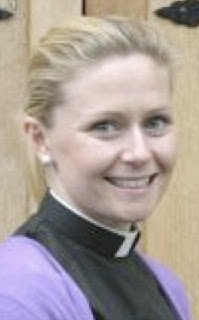 And they say looks don’t matter. Well, that’s the theory anyway, and it’s being debunked by one church in England that has seen its congregation size double since appointing a pretty young blonde as its new curate.

St Mary The Virgin in leafy Caterham, Surrey, had been experiencing a decline in attendance over the years but the arrival of Stephanie ‘Steph’ Nadarajah has heralded the start of a boom time for the church. Just six months ago, the church’s attendance stood at around 75. But, in the last six months, attendance has soared and there are now around 150 people showing up each Sunday to hear the 29-year-old preach.