Police are trying to trace the owner of a life-sized tiger toy which sparked a major police alert in Hampshire over fears a real animal was on the loose. Officers were deployed and a helicopter was scrambled with specialist thermal imaging cameras over the field, near Hedge End, on Saturday afternoon.

Animal specialists at nearby Marwell Zoo were enlisted by police to offer advice and were prepared to send a team with tranquiliser darts to overcome the tiger.

Golfers at County Golf Club were escorted from the course and Saturday's cricket game between Hamsphire Academy and South Wilts was suspended for about half an hour.

Officers discovered it to be a stuffed toy after it rolled over in the down draft from the police helicopter.

COMMENT: I am sure that the reason why so many of our sitcoms are such crap is because our comedy writers just can't compete with real life in England. 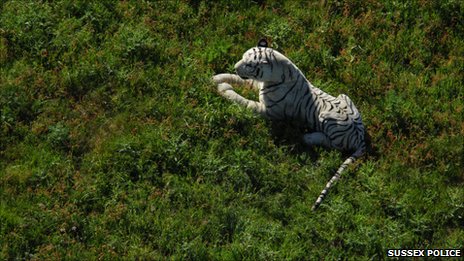