"Western countries have designed plans to cause drought in certain areas of the world, including Iran," Iranian president, Mahmoud Ahmadinejad, said in the city of Arak in Markazi province.

"According to reports on climate, whose accuracy has been verified, European countries are using special equipment to force clouds to dump" their water on their continent, he said.

By doing so, "they prevent rain clouds from reaching regional countries, including Iran."

COMMENT: Well, we're not doing a very good job of it then. Spring crops in England have been devastated by a lack of rainfall this year.

However, Western countries probably are responsible for droughts in the Middle East. But we have achieved this without any need for secret technology. We just used car emissions, carbon burning power stations and farting cows. I think we are calling it "global warming." 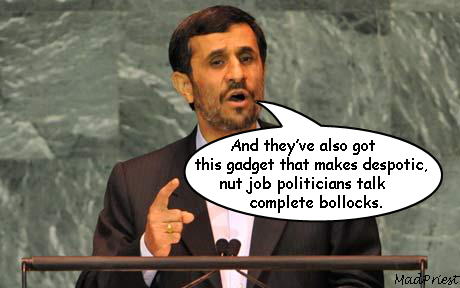