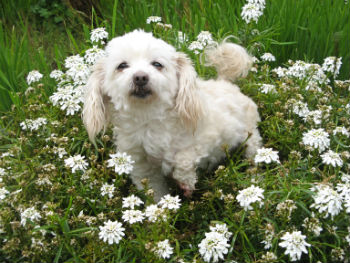 16TH. MAY: This severely injured six-year-old toy poodle was already in very poor condition by the time she was dropped from the sky onto the grounds of the Shorncliff Nursing Home in Sechelt after being picked up by a bird of prey. Shorncliff nurses attended to the injured animal then called the BC SPCA. SPCA Sunshine Coast branch manager Shannon Broderick says that the unfortunate dog was likely a stray before her unlikely “rescue”.

“In addition to the claw marks on her back and the broken ribs she sustained from the fall, all of her nails were so long they had grown into her paw pads and her teeth were badly decayed. We don’t know how long she had been wandering without care but she was obviously very neglected. It’s ironic, but this bird may have saved her life.”

The dog had no ID nor has anyone responded to the branch’s a call for the guardian to come forward. BC SPCA shelter staff took the little poodle under their wing, so to speak: “We named her ‘May’ because she was turned in to us on May 2,” Broderick says.

18TH. MAY: Thanks to our amazing supporters we now have enough money for May’s dental surgeries and she is at the veterinary hospital today for the first of her operations. She is recovering well from her other injuries and is being cared for in an SPCA foster home. There is a wait list of wonderful potential homes for May.