From THE CHICAGO TRIBUNE:

Cardinal Francis George has removed the outspoken priest, Father Michael Pfleger, from St. Sabina parish and has suspended his "sacramental faculties as a priest."

In a letter to Father Pfleger, dated today, George wrote:

"A Catholic priest's inner life is governed by his promises, motivated by faith and love, to live chastely as a celibate man and to obey his bishop. Breaking either promise destroys his vocation and wounds the Church. Many love and admire you because of your dedication to your people," the cardinal wrote. Now, however, I am asking you to take a few weeks to pray over your priestly commitments in order to come to mutual agreement on how you understand personally the obligations that make you a member of the Chicago presbyterate and of the Catholic Church. With this letter, your ministry as pastor of Saint Sabina Parish and your sacramental faculties as a priest of the Archdiocese are suspended."

The cardinal ended the letter by saying, "This conflict is not between you and me; it's between you and the Church that ordained you a priest, between you and the faith that introduced you to Christ and gives you the right to preach and pastor in his name. If you now formally leave the Catholic Church and her priesthood, it's your choice and no one else's. You are not a victim of anyone or anything other than your own statements." (Ah! I've come across that particular episcopal get out clause. It's about as believable as the old chestnut, "This is going to hurt me more than it is going to hurt you.")

During the flap over his possible assignment to Leo, Pfleger appeared on the "Smiley & West" public radio program that he had been banned from speaking at events in the archdiocese and blamed pressure from conservative Catholics and the National Rifle Association for his most recent clash with George.

On the radio, Pfleger said conservative Catholics want to return St. Sabina, a mostly African-American parish, to the way it was before he got there nearly three decades ago and silence what they believe to be progressive messages from the pulpit. For a couple of years, he said he has been the target of petitions and letter-writing campaigns by the NRA. Letters are often copied to the cardinal, Pfleger said.

"The NRA ... says I've been much too vocal about assault weapons and much too vocal about guns being registered and being accountable to gun owners," Pfleger said on the radio. "So all that combined and I guess the cardinal didn't have anything to do one morning and decided he wanted to get rid of me again."

But in his letter, the cardinal said he had no ulterior motives in wanting Pfleger at Leo. 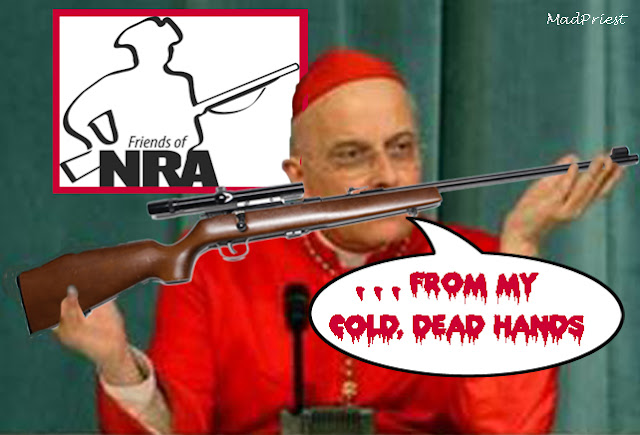