(Next) Monday (2nd. April), I'm having a Follow-Up Mammogram (because they saw Something Improper on the first). I'm 98% sure I'm fine. But there's that stupid 2%, I can't quite suppress. So spare me a prayerful thought, if you can...

This morning on my way to work, I took (Storm) to the vets office, where I learned that she probably had end-stage renal disease, from which there is no recovering. Blood work confirmed that, so I had no alternative other than to authorize them to put her down. This is the third time I have had to do that; one other cat and our dog had to be euthanized. It is one of the hardest things I'll ever have to do. Since the alternative was an animal who would be, at worst, in pain and at best, uncomfortable, there was no choice.

My younger daughter said, "Mom, you've had too much death lately" and I sure have to agree with her. My dearest old human friend and my dearest old animal friend all in the same ten day period. 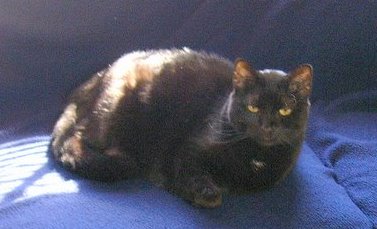 Storm has been a regular guest star on Kenju's Imagine blog for as long as there has been an Imagine blog. She was almost always beside Kenju as she tapped away on her computer and, although it is obvious that Kenju loves all her animal friends, to be honest, you could tell that Storm occupied a very special place in her affections. I'm going to miss the photos of Storm posing for the camera (like a professional model she seemed to always know what her public wanted), so Kenju's pain at this time must be immense. We pray for her, all Storm's human friends and for Storm herself as she enters into the peaceable kingdom.

My employer just canceled my health and pharmacy coverage. I don’t know what I’m going to do.

Yes, they can do this. Corporate policy is that only full-time employees (defined as working 30+ hours per week) get healthcare benefits. We’ve been waiting for my disability appeal for months now, and I have yet to be able to get up to 30 hours per week. My doctor currently has me at 24, and I’m not even capable of that. It sucks, but they can do it.

Posted by Suem at SIGNIFICANT TRUTHS:

Next month is likely to be a difficult one for me and I am taking a little while out to find time for myself and my family.

Our Easter weekend plans - such as they were but mainly relaxing - changed suddenly yesterday morning when we had a phone call from Sister-in-law in Derby saying Mother-in-law was back in hospital - she only came out on Wednesday.

She's supposed to be on a high dose of oxygen 24 hours a day and she'd turned the machine off and then panicked when she couldn't breathe. The hospital had pumped her with oxygen and, as there was nothing else to do, sent her home.

Poor Joel is back in the hospital again. He went in for a 9am appt (regular doctor appt kinda thang) They called at 2 saying he was being admitted through the ER.

Joel is on the cardiac ward. They think he was having a heart attack!!! Well, at least he did it at the hospital. He is stable and comfortable and, well, pissed. I'll put money on it that they run one of those scopes up to his heart to see if he has any blockage that a stint will fix. The alternative theory is that the meds he is on for the MG are taking their toll.... poor guy. But he is in good spirits. Keep those prayers a-comin'!

Soaring global food prices threaten to push tens of millions of Asians into extreme poverty and cut the region's economic growth this year, the Asian Development Bank warned in a report on Tuesday. Coupled with skyrocketing oil prices, the spike poses a serious setback for developing Asia.

Fighting has erupted between soldiers from Cambodia and Thailand along their disputed mountainous border for a fifth consecutive day. At least 12 soldiers have been killed.

Libyan leader Muammar Gaddafi's forces increased their shelling and use of tank fire in residential areas of the city.