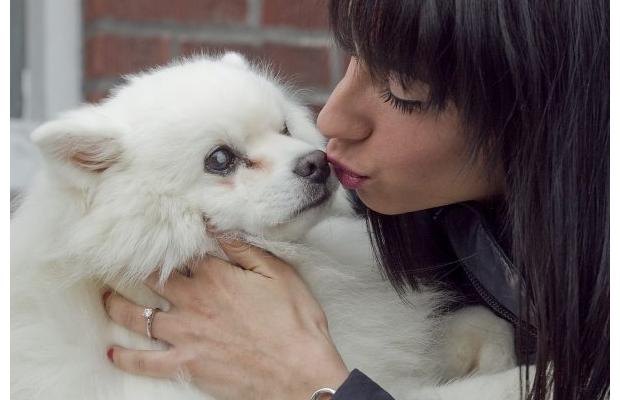 Anyone who has ever known the love of a dog gets what Ria Ghai means when she says her rescue dog rescued her. He cheers her when she's down. Spirits her from her desk when the challenges of her work - she is a doctoral student in biology at McGill University - threaten to overwhelm. Makes her feel safe.

"He's got me out of the house on walks when I thought I was going to crack, and he's been my friend to hold tight at night when I psych myself into thinking my house is haunted (yup, PhD student, still freaked out by ghosts) ... I don't know how I'd be getting through my PhD without him," she wrote recently on the Mc-Gill Grad Life blog.

Ray, as he is known, is a miniature bear-headed American Eskimo. He is blind - and almost certainly old. He came into her life nearly two years ago: she'd graduated from the University of Alberta with an honours degree in animal biology, and had a job at the Edmonton Humane Society as a behaviour specialist. Ray was brought in to the shelter after he was fished out of the North Saskatchewan River in Devon, a town south of Edmonton. He was in rough shape: emaciated, skin showing pink because his coat was so thin, tail all ratty, the fur on his paws stained brown from constant licking: a sign of depression.

He wasn't called Ray yet, though. At the shelter he was known as Demon Dog for the milky white cataracts in his eyes: they made him look possessed. A blind, old, mangy stray: hardly a candidate for adoption. And if his owners didn't turn up within two weeks, he would be euthanized.

When a week and a half had passed and no one had claimed him, "it was clear that the little guy was going to get euthanized," she wrote. She accepted his fate: in her time at the shelter, she'd grown accustomed to losing dogs she loved.

It was Ghai's boyfriend - he's her fiancé now - who stepped in.

"The dog was clearly old, he said: maybe they could make the time he had left memorable."

So on June 6, 2009, the day he'd been slated to be euthanized, they adopted him. They took him home, to their apartment with its no-dogs rule, and three times each day carried Ray, named by Gammon for the blind composer and soul musician Ray Charles, down and then up 18 flights. "He was quiet enough that we knew we could sneak him in and out," Ghai said.

It's impossible to come home in a bad mood and stay that way "when there's a fluffy, happy, blind little dude wagging his tail and bonking into everything just to get to you and say hello," Ghai wrote.

"Take a moment to thank those who, day by day, stay in your corner," Ghai urges, "whether they have two legs or four. You couldn't do it without them."

For being there for each other at exactly the right time, Ria and Ray are our...

... and a special commendation for Don, the boyfriend, for being a man and saving the day.

Thanks to Jim+ for sending this story into MadPriest Towers and NO, JCF, Ria is far too busy to adopt you, as well. Although if you were to persuade her you are to be euthanised in a week's time you might just be in with a chance.