Yes, it’s been a while – we were all getting bored of the repetitive nature of the haters’ diatribes. But this bloke’s ideas are so vile, and cause so much damage to the gospel of Jesus Christ that I have resurrected the feature just for him.

The anti-gay Catholic League for Religious and Civil Rights is going on the attack against “those who are distorting the truth about priestly sexual abuse.” The group bought an expensive full-page ad in The New York Times Monday that places the blames for the church’s scandals on “homosexuality, not pedophilia.” And perhaps most shockingly, it also claimed that some children were active participants in the abuse.

“The refrain that child rape is a reality in the Church is twice wrong: let’s get it straight – they weren’t children and they weren’t raped,” self-appointed Catholic League president Bill Donohue wrote in the ad.

“We know from the John Jay study that most of the victims have been adolescents, and that the most common abuse has been inappropriate touching (inexcusable though this is, it is not rape),” he added, referencing a 2004 study by the John Jay College of Criminal Justice, which was funded by the U.S. Conference of Catholic Bishops.

“What accounts for the relentless attacks on the Church?” he asked in conclusion. “Let’s face it: if its teachings were pro-abortion, pro-gay marriage and pro-women clergy, the dogs would have been called off years ago.”

COMMENT: Actually, Satan’s little helper may be right on that last point. The evidence shows that, although there is some abuse in denominations that are “pro-abortion, pro-gay marriage and pro-women clergy,” it is nowhere near as prevalent as it is in the Roman Catholic denomination. So, yes, if Roman Catholic teachings were “pro-abortion, pro-gay marriage and pro-women clergy, the dogs would” never have gone sniffing round its vestries in the first place. 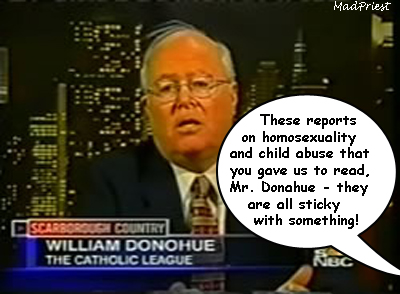