From a longstanding member of our neighbourhood:

As for my dad... well. Things there are pretty awful. He thinks I am trying to put him in a nursing home. This because I have been talking to him about making himself safer in the house, saying the house is no longer safe for him. He called my brother and told him he is going to get a lawyer to fight me. He asked my brother to save him from me. And he thinks I stole money from him. This because I put his AARP Medicare supplement on my credit card, and then wrote a check (in his presence, with his permission, which he signed) to reimburse myself. He didn't remember the next day.

I covet your prayers about all of this.

My dear parishioner died on Sunday evening. Bless him, he was ready to be done with the unbearable pain of metastatic cancer. His wife is dealing with metastatic lung cancer. Heaven help her....and the good parishioners of the parish will help her, too, doing as much as she will let them.

Only one person among 33 passengers and crew survived after a UN plane crashed while landing in poor weather in Democratic Republic of Congo on Monday. The accident, in Kinshasa, is one of the worst to involve a UN aircraft. Most of the passengers were UN staff and peacekeepers, though five NGO workers were also on board.

Posted by D Gregory Smith at FROM ETERNITY TO HERE: 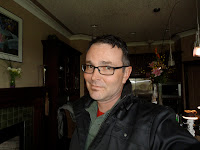 It’s all going great, and it looks like things will be done well and (almost) as easily as of old. ADAP came through, and EIP came through which give me insurance and covers my doctor and meds.

And I’m healthy- all things considered. Thanks for the thoughts, prayers, energy, love, whatever you want to call it. I’m deeply appreciative.

Finally (FINALLY! after four months) got the meds that the insurance company was fighting me on. Here's the difference: on Saturday, in between trips to the hospital, I could do nothing but take a nap. Today, having had the meds, I've been rocking and rolling and getting things done. Take that, MS fatigue!

I am busy getting ready to move to California. After we were married I came back to Wisconsin to complete some work commitments, but in nine days I will be joining Alan to live happily after ever, or pretty close to it.

Ban, a dog which was rescued last week atop debris in the Pacific Ocean three weeks after the tsunami hit northern Japan, has been reunited with its owner. After watching a TV news report on the rescue, the owner of the female dog visited the animal care center where she was being looked after, to take her back.

'We'll never let go of her,' the owner was quoted as saying by a center official, while the dog happily wagged her tail when the owner appeared."