A British woman visiting Israel was killed when a bomb ripped through a bus in Jerusalem. More than 30 people were wounded in Wednesday's blast, the first in the Holy City in nearly seven years.

Please also pray for the pilgrims from my diocese who are travelling to Israel this weekend for a pilgrimage led by the diocesan bishop. 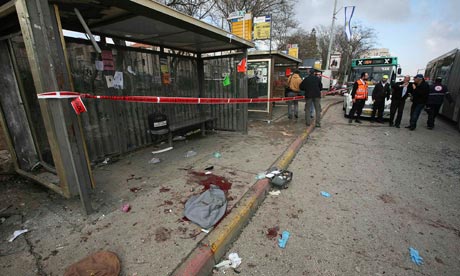 A suicide car bomb near a police station in the town of Doaba, Khyber-Pakhtunkhwa province (north-west Pakistan) has killed at least five people. Some 25 people, including a policeman and some pedestrians, were injured by the blast. It is the latest in a series of attacks near the Afghan border.

Presidential guards loyal to Ali Abdullah Saleh, the Yemeni president, have clashed with army units who have backed opposition groups and protesters demanding Saleh's resignation. The clashes took place in the town of Mukalla, in the eastern Hadramout province, on Thursday.

The main hospital in the Syrian town of Daraa has received the bodies of at least 25 protesters who died in confrontations with security forces on Wednesday. Some residents of the southern town are holding a sit-in to protest the killings.

Inspired by the wave of pro-democracy protests around the region, Daraa residents have held protests since last week. Earlier, human rights activists said at least 15 people have been killed in Daraa. Residents said security forces shot and killed six people including a doctor who was giving aid to the injured at the Omari mosque, where most of the protests took place. Security forces had opened fire on mourners attending the funeral of those killed in Daraa.

Meanwhile, pro-democracy demonstrators in Syria have called for mass protests across the country on Friday.

Colonel Muammer Gaddafi’s forces resumed shelling of Misurata, Libya’s third city, late on Wednesday night, defying an earlier wave of coalition air strikes which had been aimed at destroying some of the regime’s tanks and artillery pieces on the ground.

Two British soldiers were killed by a roadside bomb in southern Afghanistan yesterday, just six days before they were due to return home. The deaths bring to 362 the number of British troops killed since operations in Afghanistan began in October 2001. They were the 12th and 13th British fatalities this year.

Posted by Cecilia at (UN)CLOSETED PASTOR:

Asking your prayers for my dad. He has recently been diagnosed with Parkinson's. Actually, he was diagnosed over a year ago; but he didn't understand the diagnosis at that time. His hearing is extremely poor. Also, there is a dementia/ confusion component to Parkinson's that is kicking in. So... it's not clear what he knew and when he knew it. I only know that when I spoke to him about it this weekend, he seemed utterly stunned, not knowing at all what I was talking about.

Please pray for Fran at THERE WILL BE BREAD and all those who mourn the death of her sister-in-law, Olga Szpylczyn.

Would you say one for me, please? I have come down with a most unpleasant cough that kept me up half the night. I got someone to cover my class for me this morning and I'm now back in bed (having taken some cough medicine in the hopes of getting a little sleep). I do have obligations this afternoon. It's a small thing as difficulties go but I do have a house guest at the moment so this is not helping matters.