The battle cry of antitheists in England is that religions, especially Christianity, have far more influence on our society than they do. This is a lie.

Here is a typical BBC programme about religion which I am looking forward to watching tonight. 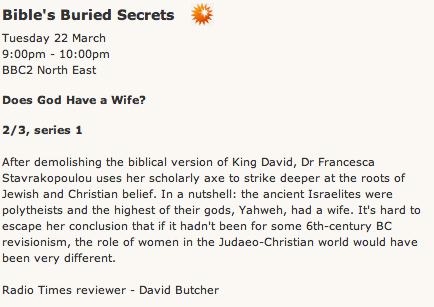 The presenter is an atheist. She will be saying stuff about the polytheistic nature of early Judaism which will be, pretty much, exactly what I have said on this blog many times in the past. The difference between us is that her agenda is to destroy faith, whilst mine is to create an informed faith.

We have had quite a few programmes recently by "experts" who have stated openly that their intention is to stop people believing in the divine. The brilliant, poster boy of English science, Professor Brian Cox, wants us to accept that the universe without God is enough. I always watch his programme and I share his passion for the beauty of physics and, especially, cosmology. However, I fear he has completely failed with me. I seem to be able to marvel at the universe without losing my religion. In fact, the more, in depth, stuff I read about the nuts and bolts of the universe, the more certain I become that the scientists are refusing to do the maths and quite deliberately so.

Now let's get a couple of things straight. I do not want the BBC to stop commissioning these documentaries - heck, I enjoy them too much. Furthermore, I don't want balance in the BBC's programming of the sort that simply has some barmy evangelical or stuffy archbishop going on about a Sunday school or Oxbridge common room God. But I would really appreciate a few programmes (in fact, whole series) which are presented by intelligent people of faith with the same level of philosophical integrity as the scientific integrity of the current crop of intellectual, camera friendly, antitheist academics.

Another big lie that people such as Dicky Dorkins and Stephen Fry put out is that people of faith, especially Christians, are, because they believe in God, inherently "dim." Feck that! I could argue Richard Dawkins and Anthony Grayling under the table before breakfast, although I think I would be on a more even playing field if I went head to head with Professor Cox and I could never smarm my way through a discussion with the arrogant panache of the omnipresent, Mr Fry. The BBC seems to be intent on reinforcing this slander by giving us this rich diet of pretty atheists talking about clever stuff on prime time TV. I would love to see really intelligent Christians, such as Professor Andrew Linzey, Stephen Shakespeare and our very own Sam Norton being given the opportunity to show off their intellectual creds for God on the box. One thing is for sure, they would respect the antitheists far more than the antitheists respect believers like them.

In fact, how about some real balance? I suggest a 26 part documentary series about life, the universe, cookery (of course) and everything co-presented by Sam Norton and Tim, the atheist (not, antitheist) who heads up "The Heathen Web" blog. Such a programme might even dispel the third, great antitheist myth that only atheists can be humanists and concerned with the secular, and also the Christian myth that atheists are boring, uncreative people who want to turn the world into 1984 Land without the fun bits.