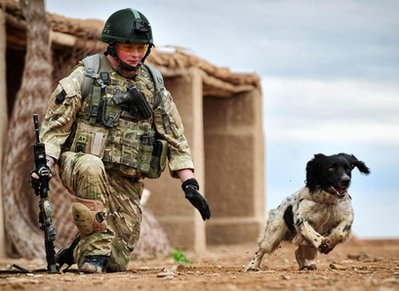 Liam and Theo were a team, fast friends doing a dangerous job — searching out roadside bombs laid by insurgents in Afghanistan. The jovial British soldier and his irrepressible dog worked and played together for months, and died on the same day. On Thursday they came home, flown back to Britain in a somber repatriation ceremony for the soldier remembered for his empathy with animals and the companion he loved.

Lance Cpl. Liam Tasker, a dog handler with the Royal Army Veterinary Corps, was killed in a firefight with insurgents in Helmand Province on March 1 as he searched for explosives with Theo, a bomb-sniffing springer spaniel mix. The dog suffered a fatal seizure hours later at a British army base, likely brought about by stress. Military officials won't go so far as to say Theo died of a broken heart — but that may not be far from the truth.

Thanks to both Jay and IT for sending in this story.