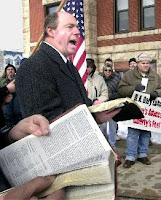 Storms told deputies he was just having lunch at the park when he had to go to the bathroom, so he relieved himself in a bottle.

Storms is known for staging protests against Decadence, an annual gay celebration in the French Quarter. In 2003, he organized a march in opposition of the event, calling it "nasty" and "depraved."